If physics is to be rewritten, product of mass and velocity, momentum, will replace the word inertia.

Right up until today, standard mathematical physics carries the B.C. misconceptions of Aristotle........... 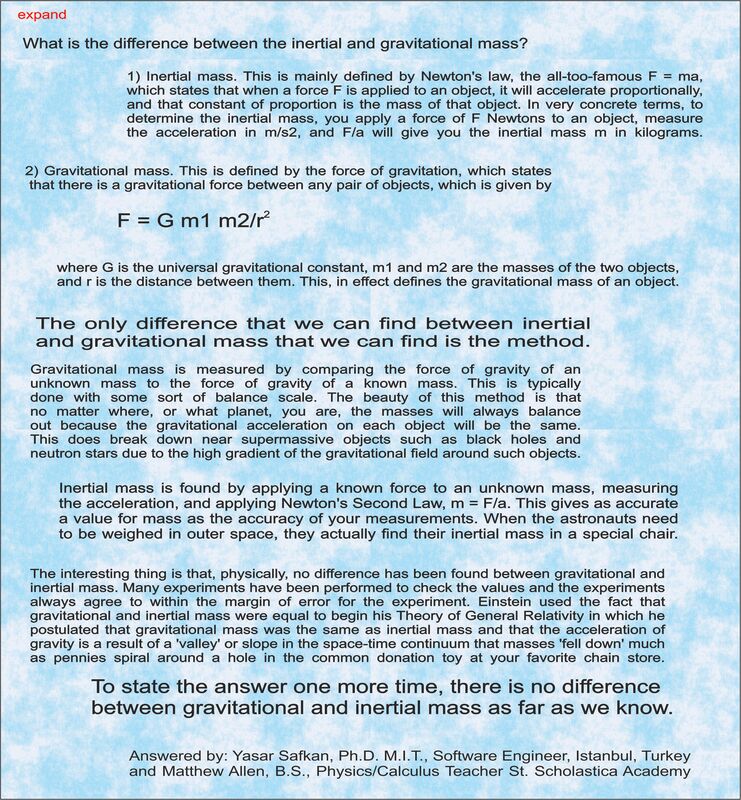 Mathematical physics is based upon the same mass existing simultaneously as two types of mass. One type is called inertial mass. The other type of mass within mass being known as gravitational mass.

​These two forms of mass within mass are not distinguishable from each other through measurement.

The original junior school conflict is both inertial mass and gravitational mass move mass into the realm of being a vector quantity.

Mass is ultimately only provable as quantity. Proof of mass causing motion to persevere or explanation of how mass causes 'gravity' are not found or aided by preceding the word mass with other words.

​Sir Isaac Newton explicitly stated how a vector could emanate from the earth's mass to cause descent was beyond his faculties. The modern educational idea has become the earth's mass initiates a descent vector into a union of space and time. This union was originally developed as a concept by several science fiction aficionados (Poe and Clarke).

In the case of an inertial resistance vector born out of scalar mass, this traces back to the B.C. period. Aristotle's ideas were force has to be applied for motion to continue. And more massive objects descend to earth at a greater rate. Galileo Galilei and Sir Isaac Newton's laws are supplied by modern schoolteachers as deliverance from these Aristotelian misconceptions.........
Galileo, or Galileo's era, deduced that a quality inherent of matter called 'inertia' was the reason a motion continued. This quality of matter both resisted a change of a state of motion and was the reason a motion perseveres.

Before Galileo the centuries already had the contrary explanation to Aristotle's various ideas of how an applied force continued to be applied beyond actual contact. This pre Galilean answer was called impetus (link) by its proclaimer. A motion supplied to an object by a force continues beyond the application of the force was what Frenchman Jean Buridan stated two centuries before the life of Galileo and fifteen centuries after the life of Aristotle.

Defined as the product of mass and velocity, by Sir Isaac Newton's time Buridan's impetus had become known as 'momentum'.

​Sir Isaac analytically proved that momentum is conserved when objects collide. He did this with a cradle of suspended balls (link)

​Courtesy of Galileo, what Sir Isaac failed to understand is the simple arithmetical base the conservation of the momentum of collided objects resides upon. Which is.....

Arithmetically the product of mass and velocity is uniform.

For modern junior school teachers and their students, when one number represents a mass quantity and another number represents the magnitude of the velocity vector of that mass, there is one and only one momentum magnitude derived when those two numbers are multiplied together.

Newton's cradle was dependent upon this arithmetical / vector fact. Sir Isaac's mind left the velocity component of momentum out of momentum and then mistakenly went along with Galileo and called this simple fact of arithmetic "inertial mass / inertial force".
​
Beyond Galileo's life and without inclusion of the two words, 'inertial mass' has been considered by schoolteachers to be contained within Sir Isaac Newton's first law of motion. That first law.........

"Every body perseveres in its state of being at rest or of moving uniformly straight forward except insofar as it is compelled to change its state by forces impressed."

What's needed is an understanding that unhindered momentum is a uniform vector. And Sir Isaac Newton's second and third laws.

"In its direction of travel, unhindered momentum is a uniform vector."

Momentum replaces the mechanically undefined 'perseveres' and Sir Isaac Newton's second and third law are left to be those laws.
​Importantly, when educational bureaucrats set educational standards, the inclusion of momentum and the exclusion of the unmentioned 'inertial mass' are both critical. If you are currently studying junior school physics, in clear and concise terms, that's Sir Isaac Newton's first law of motion. The product of velocity and quantity = uniform motion. Not inertial mass = uniform motion as your school teacher implies when he or she teaches you Sir Isaac's first law of motion.

The resistance to a change of state of free momentum only comes to be when an external force is applied. The resistance is explained simply by Sir Isaac Newton's third law.

Below the larger mass is stationary relative to the earth. The lack of motion relative to the earth is due to the absence of an applied force. Not the fact of its 6 kilograms as is currently implied by a school teacher through the appearance of the word 'perseveres' in Newton's first law of motion. 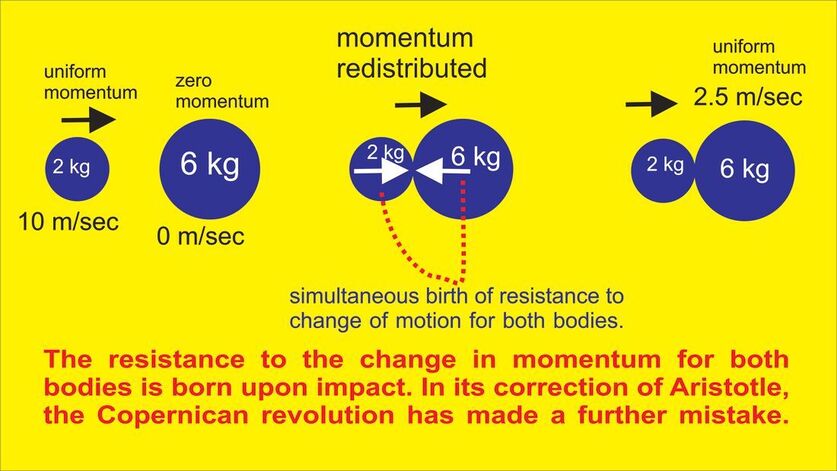 When and if relevant earth schoolteachers come to understand that resistance to change of motion originates at impact, there is only one type of mass.
​
Why the quantity magnitude of a descending body is irrelevant to its rate of descent is something Aristotle was not chronologically positioned to fully assess......
​
1/ Weight magnitude on earth is a direct factor of the magnitude of the earth's inverse square law.

If Sir Isaac's second law is a legitimate weight measuring tool, that is inarguable. What directly follows is.....

2/ Free fall rate towards the earth is a direct factor of the magnitude of the earth's inverse square law.

​
​If that definition of weight is correct, it says a potential rate of acceleration causes force (weight). And that an invented force (called gravity) does not cause weight.

​Outside Newton's second law........
Astronaut mentions back to earth that Mister Galileo was correct. Contextually, what is really mentioned back to earth is Mister Aristotle was wrong when he went with a rock falling faster than a feather.

The reason the astronaut was able to say Mister Aristotle was wrong is feathers and hammers are intrinsically weightless.

To a greater degree, the dropping of a helium balloon on the moon as well would have demonstrated back to earth classroom's that mass is weightless. The dropping things on the moon display was only to do with dropping things in the absence of air resistance. Different masses descending at a same rate was already a known earth fact.
​
When the astronaut did pay respect to Galileo, what he didn't understand is mass magnitude is simply irrelevant and not complexly relevant to descent rate on either the moon or the earth.

1/ Aristotle's introduction of the mass magnitude into descent rate was an original mistake.

​Earlier Galileo had done the astronaut's experiment with rolling balls. 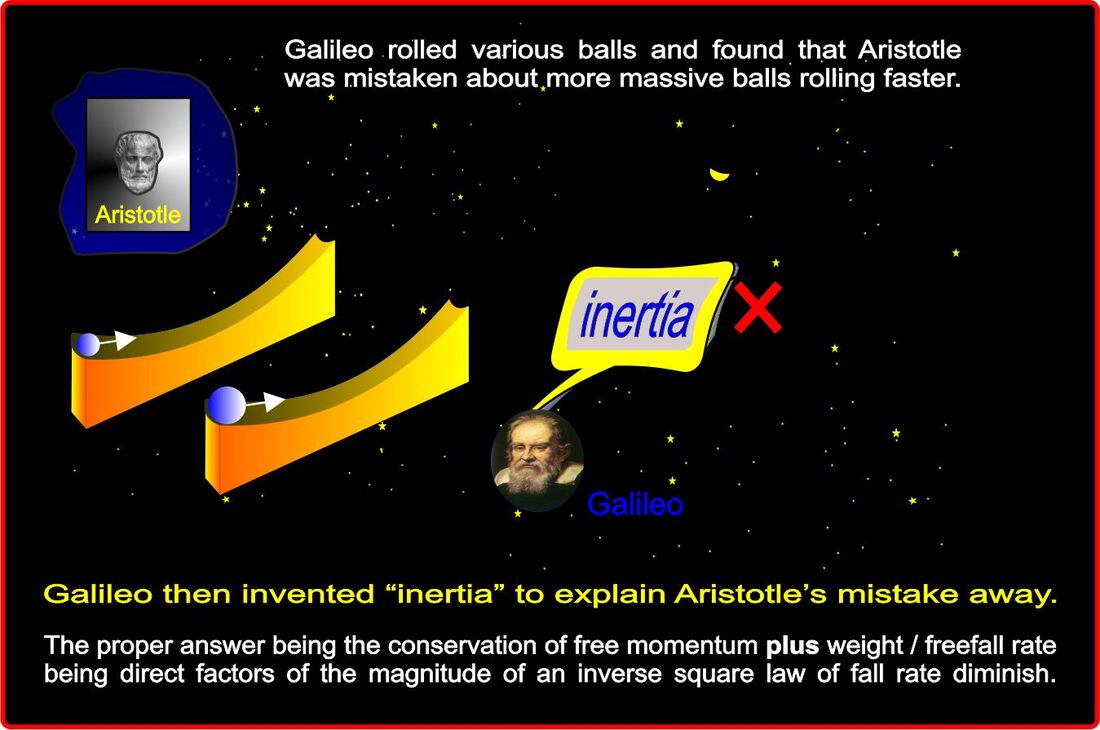 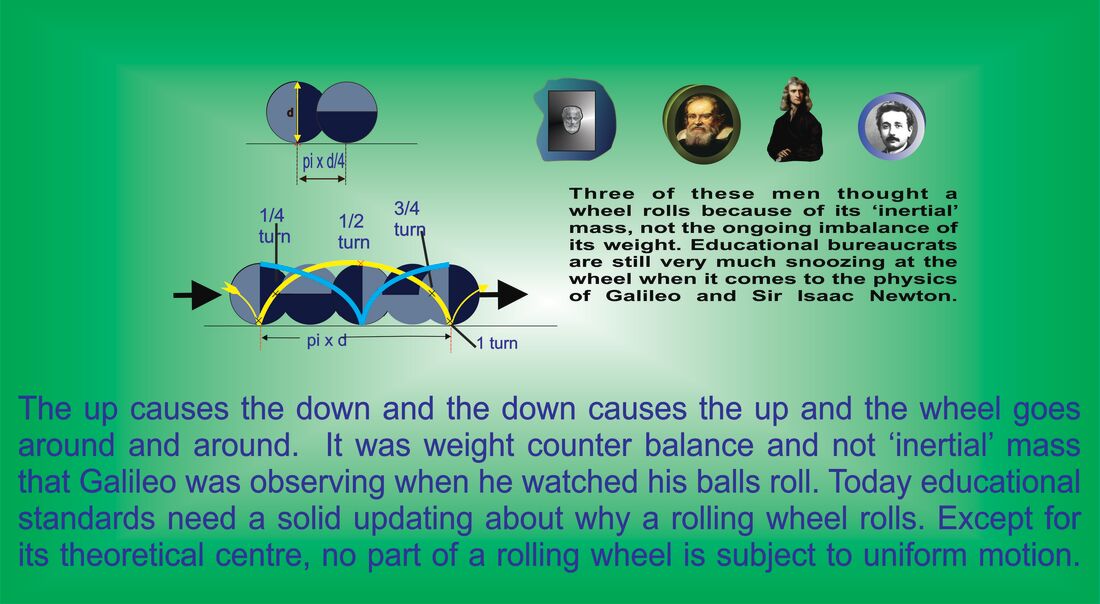 For earth schoolteachers, Aristotle being wrong about a relationship between magnitude and descent rate didn't require a counter solution involving twin mass magnitudes of inertial mass and gravitational mass. All that was required was an unadulterated understanding that descent rate is a direct factor of inverse square law magnitude.

Until two types of mass within mass actually becomes proven, promoting other theories or equations based on mass = mass is the earth waiting for its physicists to be diligent. 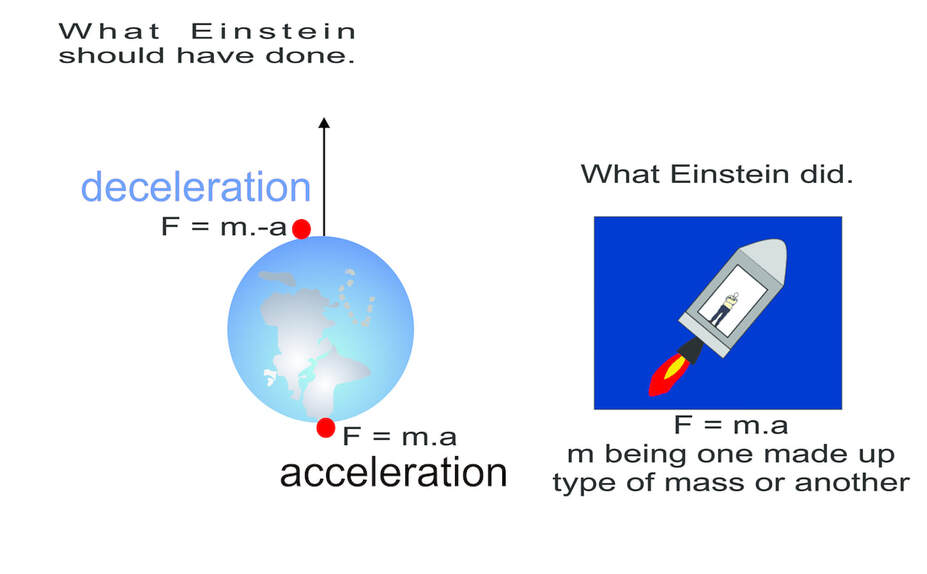 Successful stellar predictions made from theories based on confusions between a vector quantity and scalar quantity means there is something wrong somewhere. In the Mercury perihelion advance scenario, clearly Einstein's intent has been to get numbers to fit observations.

​It would be rational if the course of star light was altered as it passes by another star. With the original Eddington observation, neither the motion of the sun or observed stars was taken into account over a six month period.

Albert Einstein's statement on the equivalence of inertial mass and gravitational mass.......

It is only when there is numerical equality between the inertial and gravitational mass that the acceleration is independent of the nature of the body. Albert Einstein

Indicating that the science of Albert Einstein included being hypnotized by Galileo and Sir Isaac Newton's first law of motion, after mass plus theoretical types of mass are cancelled out, his statement says that 'gravity' is an acceleration.

​What would come next for future mathematical physicists is assessing where Einstein's theories are worth more than the paper they were written on.

​In general Albert Einstein gave genius mathematical minds new equations to fool around with. The central point being equations give either useful or useless answers. Equations are not answers in themselves.

For future junior classroom standards, the task of educational bureaucracy is releasing motion and descent from the entrails of Aristotle's mind. While true scientists are working on a vaccine, that would also be a task of merit.

​Aristotle's mistakes having an almost two thousand year hold on scholarship resulted in the Copernican revolution failing to recognize motion as the product of mass and velocity.
balloon squeeze tides