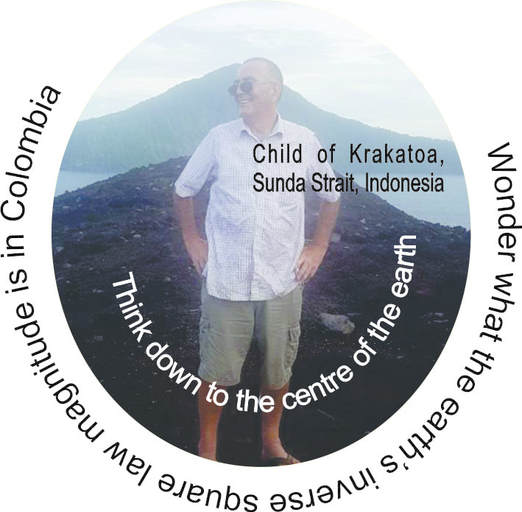 Was puffing hard during that climb but was able to pose when asked to by the guide. Decided to see some Indonesia on the way to South Africa. The left thong was to break in Namibia but that's another Martian story. The visit to the Sunda Strait was to do with the second world war. But like being in places where there is actually another country directly beneath.  Except for Christmas Island, Australia is all North Atlantic Ocean directly below.
​
​Hopefully the unhelpful smog of Sir Isaac can clear from the earth's semi diurnal tidal system.

​Post universal gravitation, the thing to do would be to determine sizes of the inverse square laws of the solar system. Get onto their changing shapes as they move around the galaxy within the sun's inverse square law. ​

How the moon can be outside the earth's inverse square law but accelerating and decelerating as if it is within both the sun and earth inverse square laws is a mystery.  If universal gravitation falls by the wayside and that mystery settles into place, professors have plenty to do.

From relative motions, the real speed of the sun maybe determinable.  Ignoring the ellipses and in two dimensions, this gives interesting results. Then it may be determinable whether or not the earth is behind or in front of the sun at a given point of time. Without question, if the sun is moving, it is going to have a bow and a stern. Whether or not they are determinable is the question. If they are, then whether the moon is currently behind or in front of the earth would come next. And then a determination of when the moon is likely to leave the earth could begin.  The interest will be whether or not it goes Mars side or Venus side.  At this stage, the sun's inverse square law can't be uniquely established between the earth and the moon.  You have to go to a few more decimal places to split the earth and sun inverse square law magnitudes.

All topics for new thinking if universal gravitation and fixed inverse square law physics go the way of Aristotle's ideas. Personally would like to be forgetting the need to get all this to the world and living my own life. Professors hopefully will find ways to stop teaching fixed sun planetary motion explanations. After all, a professor with a good conscience is just an honest woman or man with a university degree.  Might take a hundred years but it'll work out. ​ 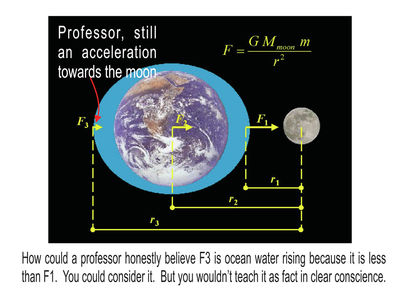 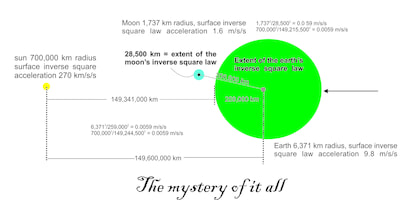 When the earth and moon galactic speed changes are animated together, it's hard to find other explanation than a system of pushes between them. That is, their relationship is not reasonably explained without them being held apart. Personally can't look at the moon at night and think otherwise. Or, if you aren't trying to add the motion of the earth when you look at the moon, you aren't doing it right.
WEEK 18  1919