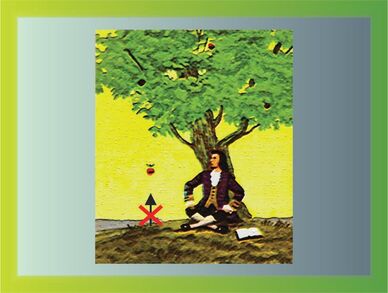 When the sun's inverse square law is brought into the picture, the tidal picture alters from an isolated earth moon one a little.  The calculative Newton third law explanation of the high tides doesn't alter. There is currently two school book explanations of the second high tide in play three hundred years beyond the life of Sir Isaac Newton and more than sixty years beyond the life of Albert Einstein.  Until there is only one, current gravity ideas are not explaining the tides of the earth,

The acceptance of Newton's law of gravity for the last three hundred years is probably a testament against mathematicians. Not the world does not have its law gravity. It does. Within a gravity field the rate of acceleration g towards a mass M at a distance d from the centre of M is directly proportional to the magnitude of M and inversely proportional to the square of d. Newton did know this law and built his mutual law from it.

How he did is not apparent. Texts simply say Sir Isaac Newton told us.  The must plausible way he has done it is through his second law.

​For scholarship to orientate itself with those given to the craft of mathematical physics simply need to understand the disconnect between accurate predictions and understanding the difference between up and down.

​The very nature of science is its contestability


This video is really made for physicists.   When it comes to the tides and planetary motion, anyone who understands the exertive difference between walking uphill and then walking downhill should be able to see that Sir Isaac Newton has made critical mistakes with both.

The outstanding problems Sir Isaac bequeathed the world is planets unexplainedly ascending in the sun's gravity and a similar problem about why one lunar high tide is an ascension relative to a direction of fall towards the moon.

At school you might or might notice these asinine problems of Newtonian physics as they are taught to you.  Or you might just gloss through them as part of a desire for a pass mark out into the world of mathematical geniuses like Sir Isaac or simply just be in a classroom because you have to be.

The solution to each problem is unheralded at this stage and each has the unfortunate societal consequence of making Einstein and space agencies in general look like kids who don't really know what they are doing.  From that point of view it is understandable why grown up physicists willingly use the instruments of government and bureaucracy to hide from the possibility to being less intellectually thorough than what their career path's otherwise suggest.

The solution to the planets ascending in the sun's gravity field is the simply the superior motion of the the gravity field itself.  The planets are not falling towards a fixed point as the school teachers endeavour to teach us. They are falling towards a moving point which is the sun itself.  All descents are relative motions is the basic that physic school teachers are missing from their computers.

The solution to tides will probably send ripples around the world if it is easily understood.  The moon does not pull an ocean at all.  Mathematically the interaction of opposing directions of fall in between the earth and moon reduces the fall rate of an ocean towards the earth.  In simplicity, that's the high tide under the moon explained and the explanation is in way analogous with a direct pull from the moon. From there the solution to the second high is simply and ironically Sir Isaac Newton's equal and opposite force law at work across the core of the earth.  Mistakes in school curricula aside, it would be hoped that true physicists would not stand in the road of at least discussion about the centre of the earth being the missing key of tidal understanding. The knowledge should change  a little how everybody feels about life up here a little over 6000 kilometers above where the earth  tidal forces are interacting.

​The obvious paradox to all this is you don't have to be Einstein to understand either solution.  But the fundamental misapprehensions that Sir Isaac has been party to went past Einstein himself.  At that level those given to the craft of mathematical physics simply need to understand the disconnect between accurate predictions and understanding the difference between up and down. In days of yon upcoming lunar and solar eclipses were most accurately predicted.  The science that allowed these accurate predictions was based upon the earth being fixed in the centre of the universe. The point is there may be useful mathematical procedures contained with Einstein's work that allow such accurate predictions.  But his work also carries the same fundamental confusions between up and down that the work of Sir Isaac Newton did.  Those who pursue the craft of celestial prediction in ignorance about the motion of the sun   just going to boil down to glory seekers.  They definietly are not people given to the task of understanding the physics behind the three laws of planetary motion around the sun that Johannes Kelpler and Tyco Brahe procured some 400 years ago.

For the sake of perspective, some fundamental things that Einstein's theories do not predict.  For a start there is like tides on direct opposite sides of a planet.  Then there is Venus turning backwards as the earth moves forward.  Adjacent outer planets having similar turns rates is also not predicted within the work of Albert Einstein.

What we are doing to create a frame work for educationalist to set the Copernican ship right is making 9 statements.  After each and all the statements are made, they will be explained in greater detail. My name is George Kingston and I went to school a while ago in a country known as Australia. English is my only language and I am not particularly proficient with it. So we just talk a bit. And then put some music on.  Hope you like the chosen virtual background and can also tolerate music from yesterday year.  Now well into the second half of my personal time on earth,  would just like to get these statements out before the heart stops beating away.

1/ Newton's law of gravity is his second law.  Confusing momentum change with a presumed force of mutual attraction. The relevant and already known and oft used law of gravity is a rate of acceleration towards a body is proportional to the mass of that body divided by the square of the distance from the body the acceleration is occurring at.  The law was discovered seemingly by accident when Newton's second law set equal to his fictitious law of gravity in what are known as cavendish experiments small masses are cancelled out in that equation of providence.

3/ Newton's first law of motion is only the conservation of the momentum of a free travelling body.

5/ The high and low tides of the earth are explained through lateral relative inverse square law magnitudes and Sir Isaac Newton's equal and opposite force law as applied to the core of the earth.

7/ Gravity fields/inverse square laws are particles,.  That is we live in a particle

9/ When all this is added together the universe is a never ending number. 3.1459.....   Or the finite and inexact ratio between the circumference and a diameter calculating itself.  We don't need supreme creators or big bangs that no one understands to understand why space is not a vast nothing aftercall.  All we need is a reinvestigation of the Copernican revolution and a recognizing that the ancients were much closer to understanding our reason why than what they realized. It should me mentioned out the outset that the universe being a never ending number does not necessarily mean that we do not survive our bodies when we die.  Also does not mean that the key to biological evolution of animals is prioritised survival of this animal or that animal.

A simple basic mathematical law of descent is worked out around the time of Sir Isaac Newton. The law is saying a rate of fall towards a celestial body decreases in proportion to the increasing surface area of a sphere around the body. As this surface area increases with vertical distance increase above the body, in proportion the rate of fall towards the body is decreasing.

​When applied to the earth, this inverse square law of fall rate diminish becomes regularly referred to as the earth's gravity field. 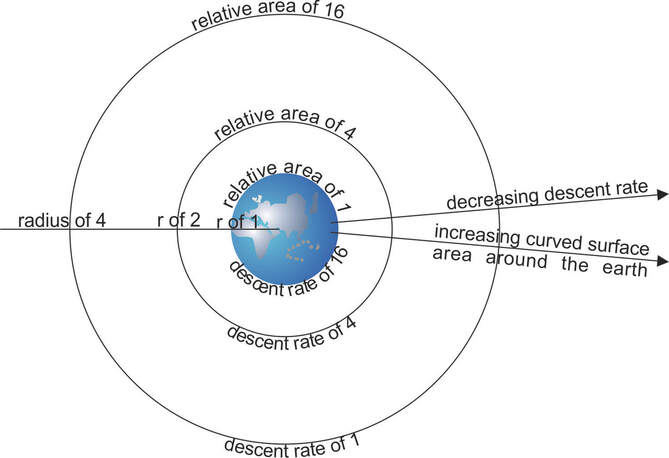 Sir Isaac Newton becomes credited with using this one way law of descent to explain a link between every particle in the universe. Sir Isaac explicitly states he doesn't know how this can be so.  An algebraic formula involving force, two masses and their distance apart becomes his revered academic tool. It is assessed to be a fundamental of the universe.

The integrity of this assessment is dependent on the inverse square law of the moon, for example, extending to where ever any other mass in the universe exists. 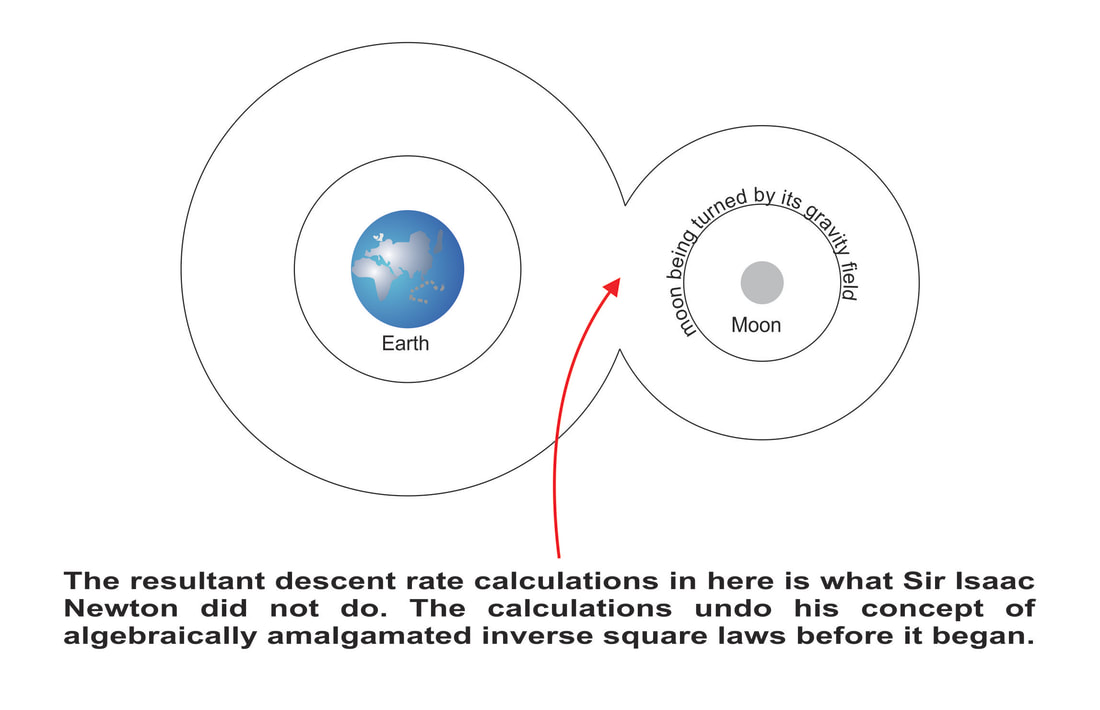 Academic geniuses subsequent of Sir Isaac were yet to consider the validity of the basic premise Sir Isaac was building from. Which was....

​How inverse square laws can physically or mathematically extend through each other.