​
​As you would probably say, the past is just another country. You are in your 1500's. You are also in motion around a galaxy. Understandably, you don't know about this yet.

In a hundred years time, Sir Isaac Newton is going to become an unmitigated disaster for the planet he is on. Your earth one. His concepts of gravity and motion are destined to dominate scholastic virtue well into your future. But the concepts are shockingly flawed.
​ 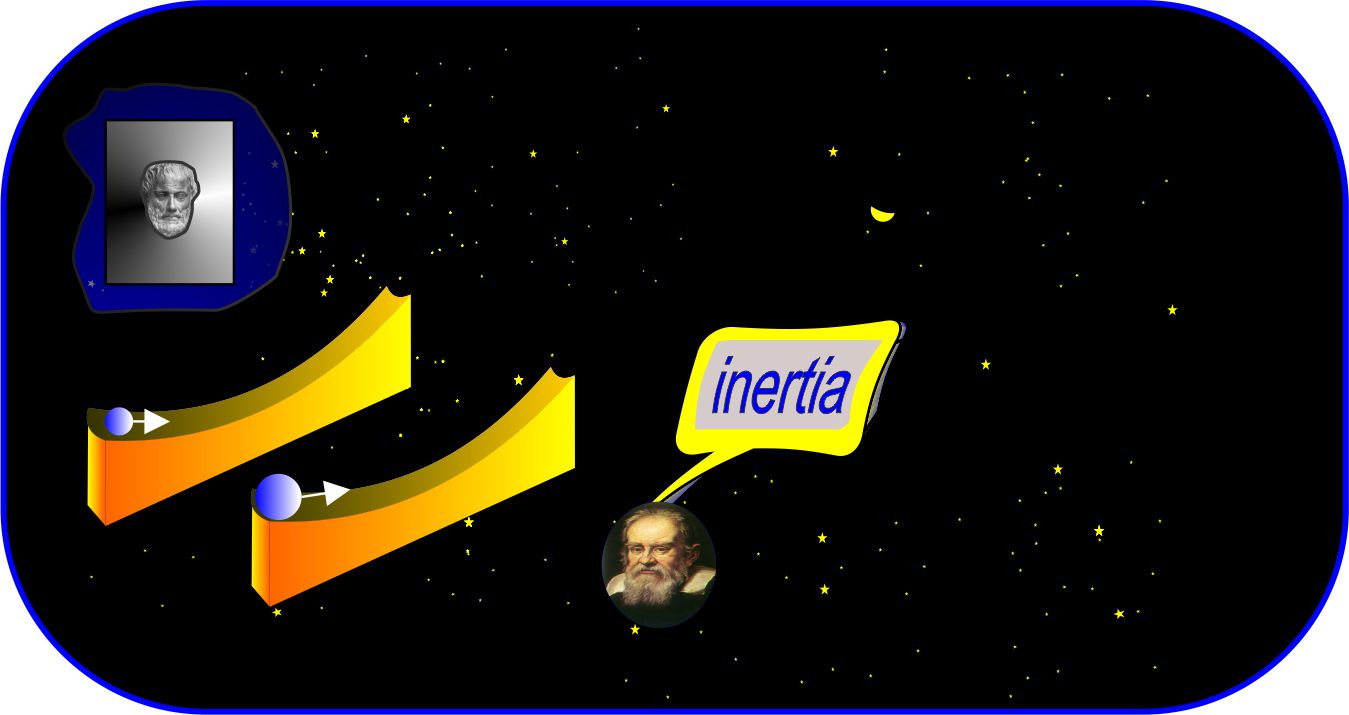 ​Your problems begin in your so called B.C. period. That's your Aristotle floating in the background. And your Galileo Galilei now pushing Aristotle aside. Galileo is making claim of discovering 'inertia' from watching balls roll.

Less the friction between his balls and the gutter, according to Galileo, 'inertia' is the reason the motions' of his balls are 'persisting' along the gutters. Aristotle had said there was no motion without force. Galileo has just worked out otherwise.

​Galileo now becomes highly involved in what is to be called your Copernican revolution. After a million years of the evolution of your human race, this revolution should really have been called Our Very Helpful Souviakiland Deduction. Or something useful like that. It is in your B.C. Souviakiland where your first records of the heliocentric planetary motion are to be found.

Anyway, Galileo believes the planets all to be performing perfectly circular orbits around a fixed sun. Imposing his discovery of inertia as the solution to planetary motion is Galileo's next step. Little is his realisation that he has an impossible solution for you. He has the planets ascending. 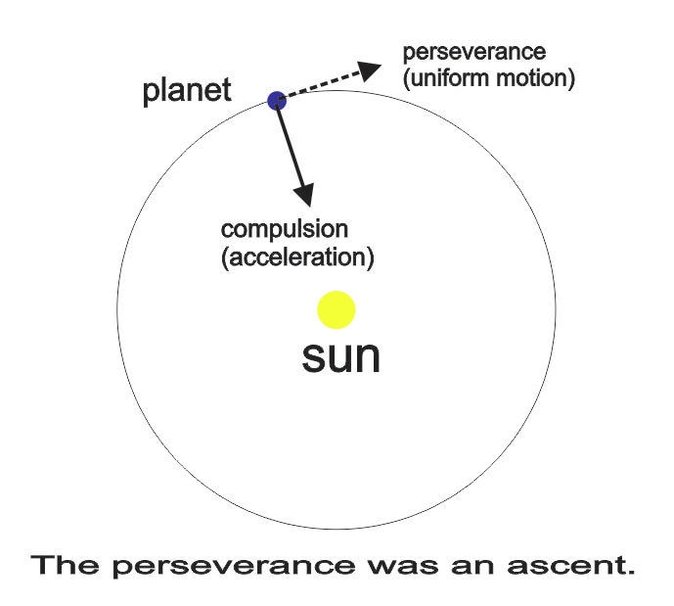 Galileo's 'perseverance' has been born to explain to the long dead Aristotle that force didn't have to be applied for motion to be motion. But Galileo's subsequent planetary motion fame places great emphasis on where the motion of the planets would 'persevere' to if the sun had no gravity. This emphasis was of course extremely pointless. The sun always has its gravity. If an earth mathematician was adding the irrelevance of the perseverance to the sun's gravity in proper manner, the result was a spiral into Copernicus's fixed sun, not Galileo's circle around that fixed sun.

2/ And the innate motion of a planet was simultaneously added to the sun's gravity.

The sun always has its gravity. So 1/ couldn't be done. This was to leave 2/ as a great unslaughtered mythical beast roaming earth classrooms.

Visiting traffic lights can only surmise that the ascent was so plain and obvious earth academics cannot see it. And that this is the reason its irrelevance could continue to be sound and teachable earth knowledge for so long.
​
​Anyway, what Galileo doesn't know is the sun is moving. In fact he believes all the stars to be fixed in space. When your technology discovers the superior motion of the sun many centuries later, planetary motion was there to be seen by your earth professors as an ebb and flow momentum rhythm advancing around a galaxy. ​Your Copernican revolution, as it stood, was unfortunately way out of whack with your modern telescopic discovery of moving stars. At your original assessed sun speed of 220 km/sec, the sun travels about 10 times the earth - sun separation in a three month period.

It was the sun, or critically, its inverse square law, that can now be seen as 'persevering' in a straight line.

Not your planet at its distance above the sun.

​What you need to know is the planets are falling towards the path of a moving star, not from Galileo's theoretical ascending straight line motion in a star's motionless gravity field. On sun in motion diagrams, a planet - sun axis is easily detectable as orbiting a planet's wave like galactic path once every planetary year.

With your earth year split in two, in the next animation, the mistaken fixed sun earth year of your past can be watched in conjunction with the basics of your earth year. In three dimensions, the two dimensional animation cramps up. On Mars we have found that flowing physical three dimensional animations in the classroom are great to look at to get an understanding of what a Mar's year really looks like as our classrooms do their progressing around the galaxy.

Here, the constantly altering direction of fall of your earth towards the sun is the green curve. And also your earth year.

The growing yellow circle the agent of the alteration of your earth's path and momentum relative to the sun as your earth year progresses.
​
This is what your earth schoolbooks and web pages that future earth professors are learning from need to contain. An earth descent axis towards the sun is orbiting your earth's ongoing galactic motion. Your Copernican revolution is confusing this with your earth performing some sort of ascending closed orbit around a fixed sun.

Using either animation, every increment of daily advancement of your earth is the equivalent of a straight line acceleration rate of about 0.512 km/sec/day. That is what the Kepler third law magnitude of a 'fixed' sun's gravity at your earth's distance from the sun happens to be. The trick to this is a perpetual curving speed gain becomes a cyclical zero speed gain if the curve becomes the completion of a circle around a central point like that of a 'uniformly' moving star.

On the lower animation, the characteristic of the motion of a gravity field putting a curve into all caused accelerations can be seen to be tapping into absolute motion for you.

So a planet's momentum relative to the sun was there to be seen by your radio telescope era professors as that of an oscillating pendulum tethered by a curving rate of speed change through space to a faster moving fulcrum. The sun. Physically the planets were nothing akin to balls on strings being swung around in a circle. That was an unhealthy earthly academic indoctrination of a higher deleterious order than your earlier earth teaching of your earth being in the centre of all things.
​

​That's Johannes Kepler. As Galileo is watching his balls roll and embracing circular planetary motion in your Great Pizzaland, Johannes is in your Great Beerland developing three laws of planetary motion for you. He does this from the diligent naked eye celestial night time recordings of a Great Dane known known as your Tycho Brahe.

​Johannes third law is uncovering an inverse square law of gravity strength diminish. And, in contrast to Galileo's circular planetary motion, his first law is stating that the paths of the planets as they move around the sun are elliptical. The sun is at one foci of these ellipses.

Unknown to Kepler and Galileo, a hundred years later a Fishchipland scientist is going to stuff the elucidations of Johannes three laws up for you. As they did, this Fishchipland chap wrongly goes to work with a fixed sun. Then he invents a calculative curve describing method requiring both zero and infinity to be individually tangible. In so doing Sir Isaac Newton fits Galileo's ascension mistake to Kepler's ellipses with an intriguing little fudge of the truth he calls 'fluxions'. In this way your super leeches have oozed into life. This new earth life form was never to care much for the discovery of the motion of the sun when it came along.  As their evolutionary process began, physicis mathematica professor was the name you quaintly chose for these new earth destroying parasites of yours.
​
​And the galaxy itself was much later suspected by you to be moving at 600 km/sec. Whether you could trust all your red shift stuff or not, your hidden doorway to the universe was now the reluctance of your super leeches to add and subtract the inferior Kepler third and second law relative motions of the planets to and from your discovered superior motion of the sun's inverse square law.
​
​As it was to work out, the Fishchipland scientist's endorsed and created irrationalities are still being resolutely maintained by your unethical bone brained fixed sun super leeches three hundred years after one of your apples fell and hit your earth ground. If the majority of everyday earth citizens were happy with the fixed sun planetary motion untruth their destructive parasites were of weak and low moral about, there would be nothing much to agonise over. Leaving these horrifying mathematical bloodsuckers to be the supreme custodians of ill founded fixed sun physics was an option open to earth governments and earth education departments alike.
​

If a moving sun base of understanding of the solar system was going to be reached here on our earth, it means a certain man of falsely fixed inverse square law theory was indeed in need of a decent swift kick up the backside. Representing all that was bad about made up apple stories and our professional earth scholarship not being heedful of close to earth contradictory astronomy, Albert's theories and accepted proofs have all ignored the motions of inverse square laws. With the drone of jet engines in the background, it's now pre planetary alignment year ? here on earth. By peering through the sub truth glitch in Sir Isaac's fluxions, we can easily pick up the relaxing heresy vibe. This sudden renegade energy could eventually allow all us parasitic fixed sun professors to become required worthwhile moving sun professors on planet earth as planet earth advances further around the galaxy...........................