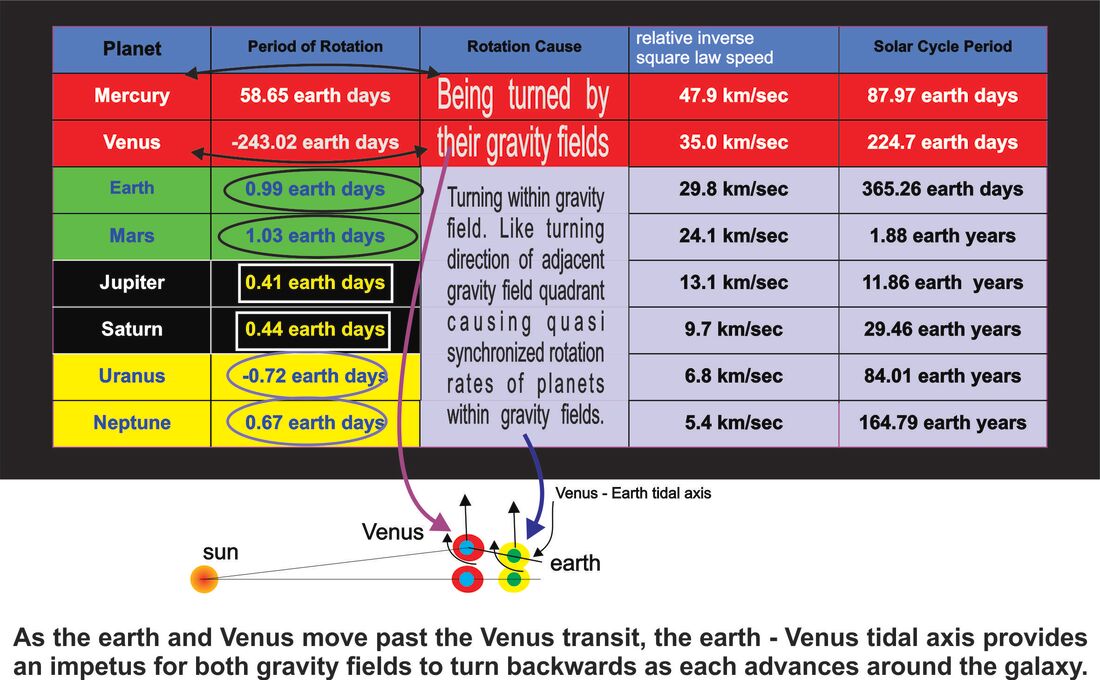 ​
Whether or not inverse square laws are relatively large particles built of infinitesimal spontaneous particles, adjacent tidal axii subject to several relative speeds will or would most likely explain day lengths and also Kepler's first and second laws.
​
Apart from a transit being an alignment of two planets with the sun, the first things to note from the rotation rate table are the inner two planets are like the moon. Have rotation periods of the order of their orbital periods.

The Mercury year length is 88 earth days and the Mercury rotation period is 58.65 earth days.

The second thing to note is the planets beyond these two have many days during their year lengths but adjacent pairs have similar day lengths.

​Thus the rotation cause aspect you can see on this table.

If you can note those things and then consider the rotation cause aspect to be a possible/probable ingredient of a moving solar system, it's all pretty interesting. The same face of the moon always being towards the earth is a good clue to the moon being turned by the tidal quadrant of its gravity field. The inexactness of the elements of the rotation aspect for the planets, well the rotations are going to be 'orbital' period conflict rotations of inverse square laws between planets. Not just a locked synchronisation with one other planet.
​
​​​On these adjacent inner planet a quarter of an orbit advanced beyond a transit diagrams, planetary speed magnitudes come tidal axii speed magnitudes are relative to each other. With respect of the motion of the sun, the diagrams are all timeless and the push vectors instantaneous forces. Minus the ellipses, the diagrams are scale diagrams.
​
​The interesting thing is the tangent from an inner planet is directed in the region of the next planet out a quarter cycle beyond the transit of the inner planet. The fact that the only obtuse angle between the tidal axii is on the Venus - earth diagram is a bit on the interesting side as well. Getting the ellipses on the diagrams would or should further the interest. Without the ellipses, the pairs with smaller relative proximities (Venus / earth and Uranus / Neptune) give rise to the two backwards rotating planets.

The facts astronomers are giving us are Venus turns backwards on its axis once whilst this planet does almost exactly 2/3's of its 'orbit' around the sun. That is Venus rotates 3 times on its axis while the earth completes 2 years. And, every 584 earth days, the same face of Venus is almost precisely towards the earth when Venus passes between the earth and the sun. There are a few other little rotational/cyclical near exact ratios between the inner three planets as well. For instance, a Venus sunrise occurs every 117. something earth days. Meaning there is almost precisely 5 Venus sunrises to each Venus transit of the earth. And Mercury rotates twice on its axis every 117.3 days.

The Earth - Venus - Mercury relationship is really a quite compelling suggestion of the idea of gravity field turn rates being the clue to planetary rotation rates. The Venus 'orbital' direction and the Venus rotation direction are opposite. As Venus advances around the sun, the face of Venus directed towards the sun slowly changes. This face change is synchronized to the Mercury rotation period while the actually Venus rotation period is synchronized to the earth year.

That almost says it all. Lingering doubts persist because it means that the earth's lunar tides are really earth solar tides that are getting moved around the earth by the moon.

Anyway if the tides of a planet are factors of the equal and opposite quadrant nature of an inverse square law, minus a moon or moons, the solar low tide axis of a planet is an instantaneous circle around the motion of the sun at a planet's distance from the sun.

Then, if the earth - moon high tides run through the Venus inverse square law during a transit, the low tide axis of the earth - sun system has an impetus to be rotated out of this circle toward the 'orbits' of Venus and Mars as this earth planet moves forward.

On one hand the planets have the relative speed that descent within the motion of the sun's inverse square law yields at a planet's distance from the sun. (Kepler's third law)

These quasi mutual inspirations appear as the rotation rates of the planets and the ellipses. (Kepler's first and second laws). Maybe anyway. Pluto's inverse square law seems to be marginally outside the tension. Not sure.

​If you are part of an up and coming generation of young people or whoever, have a think. After the journey to discern it, declaring that rotation rate table to be coincidence without certainty would be stupid. The prima facie evidence is it is up there with the best of telescopic finds.
​
When personally bringing the table into focus, finding a way of getting an educational focus on the tidal flaws in Sir Isaac Newton's law of gravity seems to be the more important chore at hand. But there is something going on between the rotations of the planets. Uranus seems to be tidally jammed between Neptune and Saturn. If it is on the right track, the 24 hours in our day and the 23 degrees of our axis of rotation would be a consequence of the uniqueness of the solar system. The more you involve yourself with the table, the more magical our existence seems to be. It's not just a question of could there be other planets that support life. The covering question is could there be other solar systems that support life.

The way Kepler presented his great work is probably where the trouble is. Time squared in the third law means nothing. Likewise the fact that a planet sweeps out equal areas in equal times in his second law.

2/ The second law says the speed of an individual planet relative to a moving sun varies with the inverse of its distance from the sun.

3/ The third law says the average speed of any planet relative to a moving sun varies with the inverse square of distance from the sun.

The Galilean rocket science problem of the planets ascending and descending at the same time aside, the answer to Halley's question was a circle. Not an ellipse. Somehow Sir Isaac has attributed the equal areas in equal times to the sun's inverse square law. All the equal areas in equal times means is as specified in 2/ above. Plus the striking conflict with the third law.

If astronomers or whoever get some spare time, worse could be done than having a go at the rotation rates of the planets.