Hello. My name is Sir Isaac Newton. Hopefully rotation rate considerations are refreshing you enough to allow a few words from me. Now that I am well into my afterlife, I am a reforming human being.

How could particle A help particle B draw its self to particle B. I looked at the high tide under the moon and confused particle A and particle B with opposite poles of a magnet. The earth and moon are not opposite poles of a magnet. This is my excuse. The dog was eating my homework. Jostling for priority over Johannes Kepler's meticulous work was unseemly. I thus now dub me Sir Scholarship Stuffed Right Up.  Johannes's work is there to help the world. I used it to make money, and as the times were, further invest in sugar and servitude.

Without knowledge of how oppositely directed inverse square laws can mathematically or physically co-exist in space, or unify as one in space acting in two directions at once, my law of gravity was something that should never have made it to the school books.

My failure to investigate the arithmetic of the opposite directions of inverse square laws meant the celestial outlook of the earth planet was to fall into hands of succeeding mathematical geniuses. If they truly believed every particle in the universe is attracting every other particle in the universe, these geniuses are all as stupid as I was.
​
Of course the G in your subsequent Cavendish experiments does seem to be genuine. It is a moving sun professor's job to work out just what it means. The small mass is cancelled out and takes no part in the derivation. And the large mass doesn't move. It appears that the experiments show M/(g.d.d) = a constant for all values of M where M is a mass, d is a distance from the centre of M and g is a rate of acceleration at d towards the centre of M. The tides say there is much more to it than that. But it does look like there is a basic gravity constant found from a multiplication of mass by its surface area.

After that, professors, if you get around to reckoning that the 0.512 km/sec near linear earth daily speed change must mean that there is a system of 14 day pushes between our earth and moon inverse square laws, what we probably have is the evolution of critical knowledge in the wings. Space is matter.

If it is concluded that the earth and moon must be held apart, there will be a force away from our earth as in the earth's atomic mass displacing space particles and creating an inverse square law acceleration field around the earth. Sort of like the principle of good old Archimedes but not exactly.

A space particle beginning is the natural force emanating from the centre of a void. The limit of the void being the opposite force and the completion of the particle. The trick being spherical (four dimensional) particles can never exactly fill a void and odder shaped particles collapse as they form..

​The opposite force (to the one away from the earth) will be traceable through the light years to the extremity of dimensional space. Have fun working it out but the reason of a curved acceleration towards the path of this planet will or would be along the lines of increasing spontaneous space particle size as the surface area around the earth increases. The larger the space particles, the longer it takes for atomic mass to fall between the particles. The direction of fall being towards the void of least volume, no falling at all in a void. Just have fun with it all, smell all your roses. You might come up with it a bit better, that may carry another mistake, but an inverse square law in space says the nature of space changes with vertical distance. A space-time curvature, that was brought into vogue by some other mathematical genius who had also got himself totally tangled into Aristotle..

​Finally, fixed sun professors, in some ways the celestial woes you are currently causing planet earth began with Geometric Euclid. Not just with Aristotle.

Like Aristotle, Geometric Euclid lived before anyone came up with a heaven and hell B.C. A.D. calendar. Some say Geometric was born in the highly intelligent circle drawing Middle East over two thousand years ago. Others say he was a Trojan horse and lived on a sunny Greek island with a donkey. Over to you Geometric.
​

​
​That might be enough from you, Geometric. How would you know what an inverse square law in space looks like. And remember starting that infinite straight line joke. It's now rotation school time. Planet earth has gig after gig of memory and heaps of WiFi everywhere. That infinite straight line joke of yours is interwoven into all this with new world experts saying there is a space time continuum when they don't even know what time is. Laugh you may. Like mine did, from all accounts your WiFi really sucked. One time I couldn't even get on Ebay to buy a new set of britches for my next interlude with my ever so stupid peers.
​
If there are ever any moving inverse square earth professors, you are going to have to now over see the working out of the universe for our earth planet. Look at the stars at night and drawing the size of the universe on paper next day maybe good starting advice. I was just a years ago wayward mathematical genius who caused a confusion between mathematics and physics to become accepted as science. Importantly modern earth professors still saying every particle in the universe is helping cause every other particle in the universe to be falling every which-a-way at once are the biggest trolls of the current earth. You are as wayward as I was.

Apologetically I wanted to be smartest genius a university could ever have. And things got worse. Some German's calculus came to dominate top echelon university life. Calculus equates the infinitesimal with zero and the very large with infinity. These are errors. The infinitesimal exists and infinity doesn't. Unfortunately for the professor sector of our world, calculus is a rough mathematical tool, not an equation supply chain into the universe.
​
To get you up to date. You are......

1/ On a galactic journey

4/ With an immediate inner adjacent planet turning in sync with the forward galactic movement of our planet.

With apologies to my ever so stupid peers, yours truly, Sir Scholarship Stuffed Right Up
​ 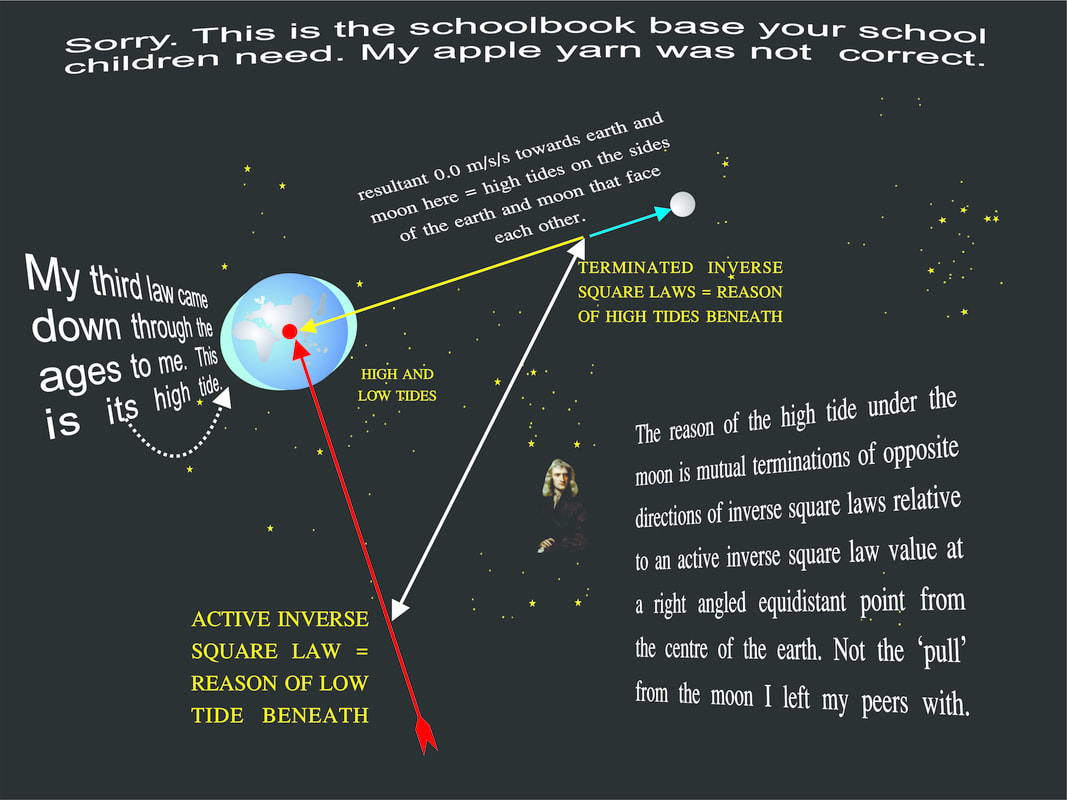