We do not easily wish to hit the raw earth nerves exposed by over belief in a naughty law of gravity. We just need your toilet. But we do omit to believe in your outside the circle supreme creator. Harrowing as it maybe for your earth professors, we have the circle itself down as the creator of the universe. The universe is the perpetual motion centre of the biggest circle. 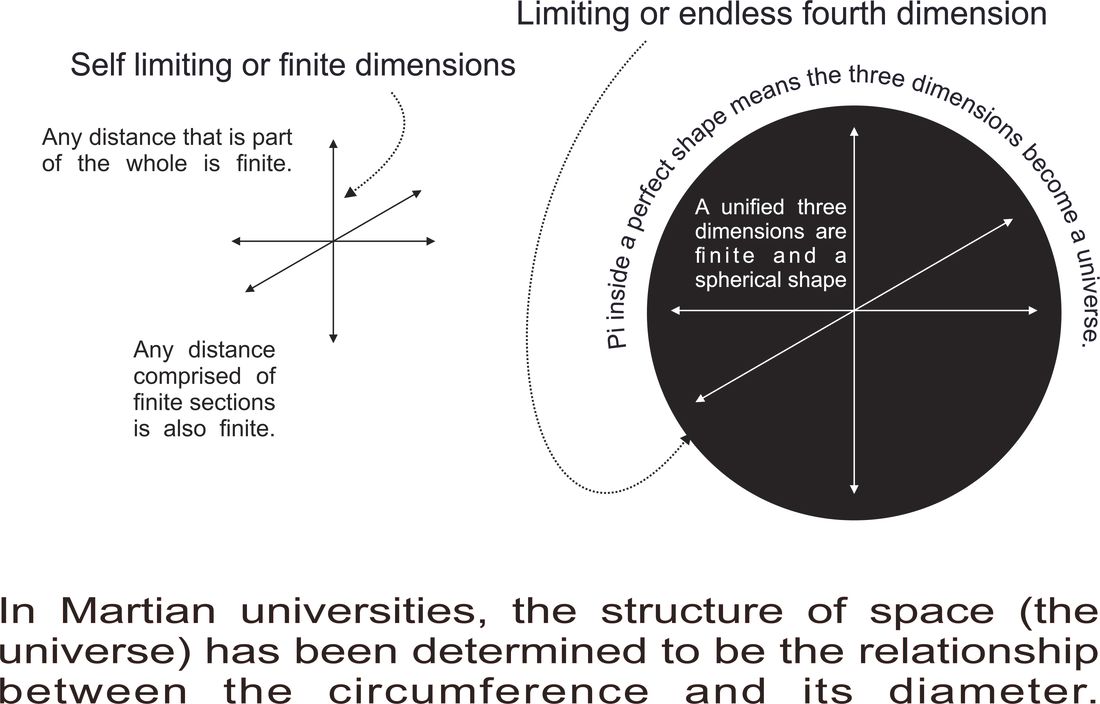 ​
​So, for your genuine junior school edification, our analysis of space and time. The x, y, and z axes in unity have a fourth dimension. Their limit. This means the three dimensions in unity are a particle made of particles relative to the pure nothing outside the fourth dimension. This is the way we have analyzed space on Mars. The universe that we are a part of is the finite, the finite being what mathematically lies in between the impossibilities of zero and infinity.

The fact that the ratio of a circumference to a diameter is finite is the Martian primary school lesson about the size of unified three dimensional space being finite. Boring as it might be to some earthlings, at secondary school the fact that the ratio is inexact is suggested as the reason a unified three dimensions is a universe of motion within.

At the tertiary level we go with the three dimensions have completed their unified evolution of distance. Space, or the diameter of the universe, is currently of a fixed size is the way we brainwash our university students. Well, we put it to our university students that once length, width and breadth become exactly of the same measurement, distance stops evolving. The fourth dimension then is exact.

​
One day at your earth university level you might even assess the shape of a sphere to be the endless curved dimensional mate of the inexactness of its diameter, the diameter being the limited three linear dimensions of length, width and breadth.

Time for a Martian is the antithesis of these four dimensions as in their absence. Within the ultimate fourth dimension this is Pi or the never ending creator and the base cause of all motions. Whether seeing time as relative or not, trying to define time through any sort of continuum is more of your real good academics being out of whack with the intelligence of your real extinct dinosaurs. 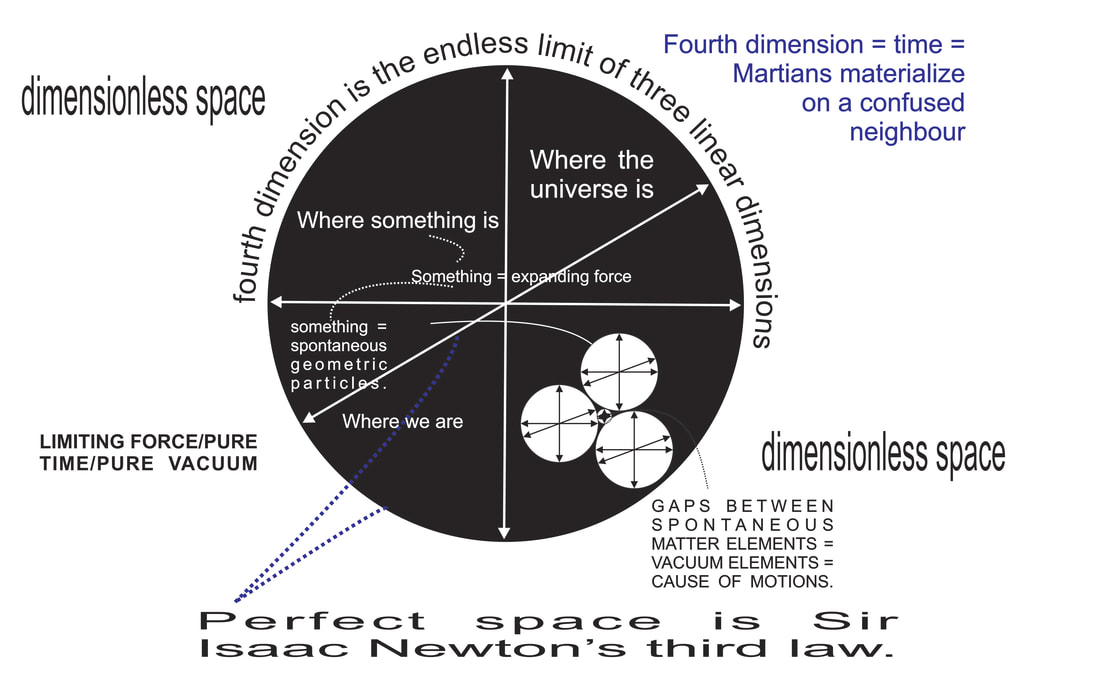 ​
​For your visiting traffic lights, the fourth dimension is concave on the inside. And convex on the outside. Particles are really four dimensional. Have length, width, breadth and shape.

We have the original four dimensions, or space, down as what naturally exists because of the intersection of the first three dimensions. How the largest fourth dimension being geometrically particulate within leads to periodic intelligence (atomic particles) we can only surmise. But, starting with your earth and its moon, you are probably going to have proof of a solid form of matter between planets and moons. As in their inverse square laws/gravity fields taking it in turns to push each other around the galaxy within the overall constant forward motion of the sun's inverse square law. Which will be getting you going in the direction of knowing space is minute particles and thus that existence is rationally explainable through the impossibility of the x, y and z axes being infinite.

Time as a fourth quasi linear dimension continuously unified with three linear dimensions came out of the writings of two of your planet's imaginative pseudoscience writers. Not your proven earth science. So all should be good at your earth university level with getting on the right track about what the fourth dimension is. Mainly, until you get your time considerations above counting, your theories on the universe will never be of much use to you.  If you do wish for a beginning of time it is the beginning of length, width and breadth.  And, if you also wish for an end of time, it is the end of length, width and breadth. Such beginnings and ends of time are then connected by perpetual motion.

This planet's great religious men, women and children may actually argue that the x, y and z axes need an original supernatural creator. After all, life after death seems supernatural. Alternatively, life after death may be completely natural. Where your dreams happen may simply leave your bodies when you die without the need for any supernatural creator whatsoever. And, realistically, a complete absence of the x, y and z axes is going to be particularly hard to either religiously or mathematically prove here on your beautiful earth. You would have to presume that when Pi was at an early stage, that space was of a crude shape relative to that of the perfect sphere. The right angle between the three axes was inexact. Importantly, when your wonderful religious Pope type of earthlings pose "how can something come from nothing without a supreme creator turning nothing into something", they are presuming nothing is an original possibility. If an absence of space is an impossibility, your Pope types of earthlings have no question to ask but are getting its answer anyway.
​
​'Finally we shall place the sun at the centre of the Universe. All this is suggested by the systematic procession of events and the harmony of the whole universe, if only we face the facts, as they say, ‘with both eyes open. ’Nicholas Copernicus, 1473 - 1543.

That's your Nicholas Copernicus below. One of your the earth isn't fixed in spacemen. Unfortunately, his placing of the sun in the centre of the universe is a major reason behind your excellent modern earth academics immediately needing major thought pattern surgery.

​For as long as the right angle lasts, there should be the fast moving stars we see for 12 hours or so a day from our respective planets. Whether or not the right angle can destroy itself, perhaps ask the Venetians. On Mars we think not, post perfect unification Pi will continue to calculate its self, but we are completely sure that mathematically space is what lies in between the impossibilities of zero and infinity. That is space is the finite and 3.1459.... is its eternally growing baby. If we can't meet your sale price, can we please take all your giraffes home for a little while?