The last exposure is in 2016 Singapore and by then the making of this personalised galactic web page about Sir Isaac Newton's slippery slope law of gravity was under way. The consternation in the photo was probably as much to do with a looming airport goodbye to a South African bound daughter for a year as anything else. The shot captures a last meal thing. And the food was late. As an indication to where the mind was at, the trip meant finding out button and light colours in aeroplane toilets. And aeroplane food is o'k. Eat it all. Love Australia but basically just love getting in the big bird. As far as consternation goes, when you are shy without desire to be an 'it' person of planet earth, knowing the geniuses of the world are wrong does weigh heavy. Not good at handling professors taking planets down wrong paths. Not wanting public recognition is the major obstacle to getting information out. Never been an impatient foot stamper. Not really suited to a jumping up and down about where the earth planet is wrong. But then you end up with well who is.

"The point in between your earth and moon where a droplet of ocean would accelerate towards neither body is the mathematical/physical key to the high tide under this single moon you have here.

​This droplet of ocean acceleration in neither direction point relative to a point equidistant from the centre of your planet but at a right angle to the earth-moon axis explains why you observe that high tide under your moon. And low tides at a right angle to your earth - moon axis.

After that the earth central dynamic of the second high tide becomes schoolbook simple for you. That tide is the equal and opposite force across the core of your earth to the force on the moon close side of your earth. And, interestingly, if your very own Sir Isaac Newton's third law is a true science, this explanation of your second high tide cannot be wrong. What this means for you is your academic refrain of forces existing in pairs is correct. But those pairs are not within the fantasy of your Sir Isaac Newton's mutual gravitation formula. With respect of any tides, those pairs are the vector pairs across the centre of a gravity field. Or, in accordance with the following arithmetic, look down at your planet and its moon when their separation is the average and you should see your planet's force pairs below." 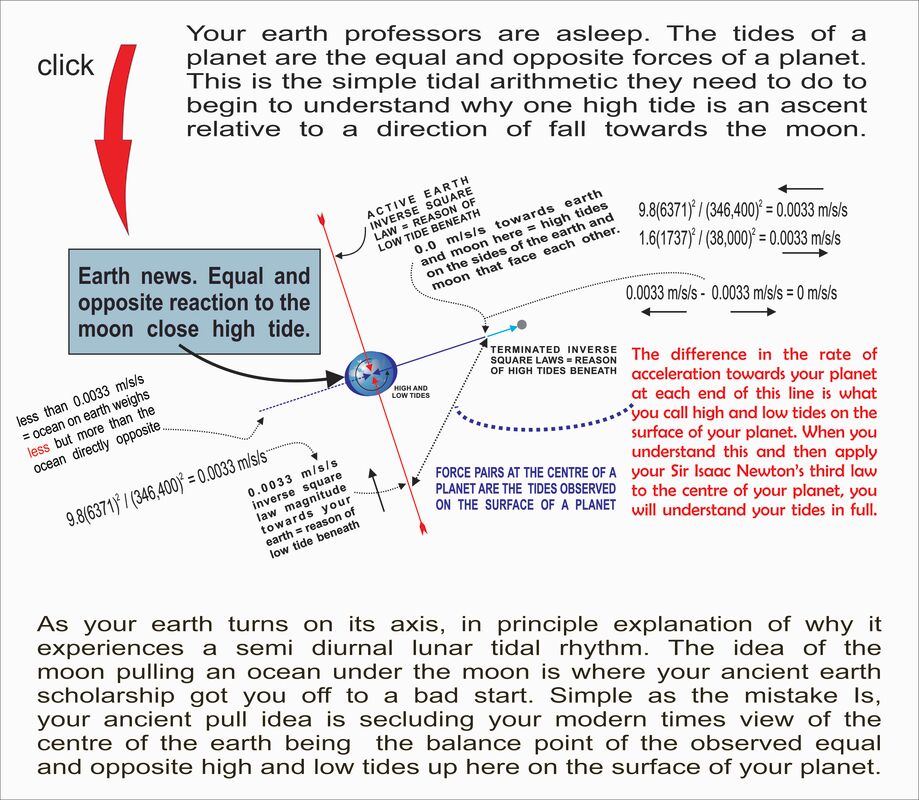 ​"So, when you find that none of you is going to consider anything that says your sophisticated satellite launching mathematical scholarship has been working hard to maintain a mutual gravitation fantasy as truth in your junior school books for hundreds of years, you gradually come to understand everyone else must be under a spell. 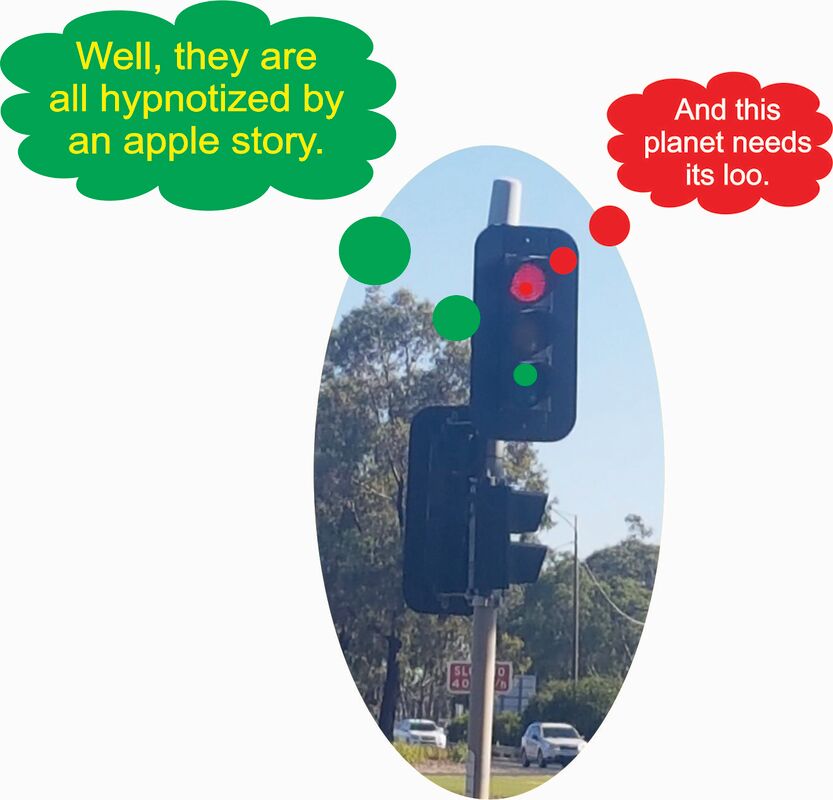 ​"Earthlings, please don't be shocked or overwhelmed. All we want to do is wake professors up for you. The alarm has gone off and they are still asleep. Yes we are entrepreneurs in the market for a closer to the sun planet. But we have no real wish to put a down payment on one inundated with professors who haven't understood tides or planetary motion yet.

​On that matter, naturally the question of whether or not your planet has beauty is put to you. To us newcomers it has definite allures most everywhere. It seems, though, that you earthlings have decided it is a run of the mill part of the universe. To prove your point to yourselves, you allow a confused law of mutual gravitation to roam freely through the minds of all your great professors. We can't quite work out where your superior earth intelligence is exactly at. For some reason, presumably hypnosis, you are shockingly eluded by the simplicity of the tides of your planet being the equal and opposite forces of your planet.

Now. If an earthling can see Sir Isaac's law of gravity is not your answer already and is prepared to risk Martians, possibility of going straight through to the reluctant Martian web page exists. Hopefully, though, your brilliant professors will be woken up when they see through Sir Isaac's fantasy. Then they can take charge of the inverse square law on your great planet and all earthlings will be able to breathe easy about your traffic lights really being us Martians looking for your toilet before any buy sell negotiations begin."
**** Week THREE