universal gravity does not = mutual gravitation = equal and opposite tides

​For better or worse and grabbing the bull by its ever so stupid horns, the door through to a better understanding of the universe would begin with this secondary school physics undoing of Sir Isaac Newton's law of mutual gravitation. Unequivocally, simple arithmetic shows gravitation not to be a mutual phenomena of the universe. Sir Isaac must have been having a rush of blood those three hundred years ago when he said it was.

​The way Sir Isaac most likely built his law.

"Therefore does this apple fall perpendicularly or towards the centre? If matter thus draws matter; it must be proportion of its quantity. Therefore the apple draws the Earth, as well as the Earth draws the apple." Sir Isaac Newton, 1726.
​
​What those linked words (in proportion of its quantity) of Sir Isaac do is give rise to Sir Isaac's second law being in his mind when he came to his declaration of the mutual gravitation of the entire universe. (Modern evidence would show the proportion Sir Isaac was assuming was between the product of quantity and surface area. Not simply quantity. For example, we now know the moon has 1/6 of the surface gravity of earth. Whether we accurately know the moons mass or not, it has about 1/50 of the volume of the earth. We believe the moon has about 1/81 of the mass of the earth. [(earth's surface area x 9.8)/(moon's surface area x 1.6 = 82.4)] Whether or not assessed celestial masses are artefacts of Sir Isaac's flawed concept of mutual gravitation is the unknown.) 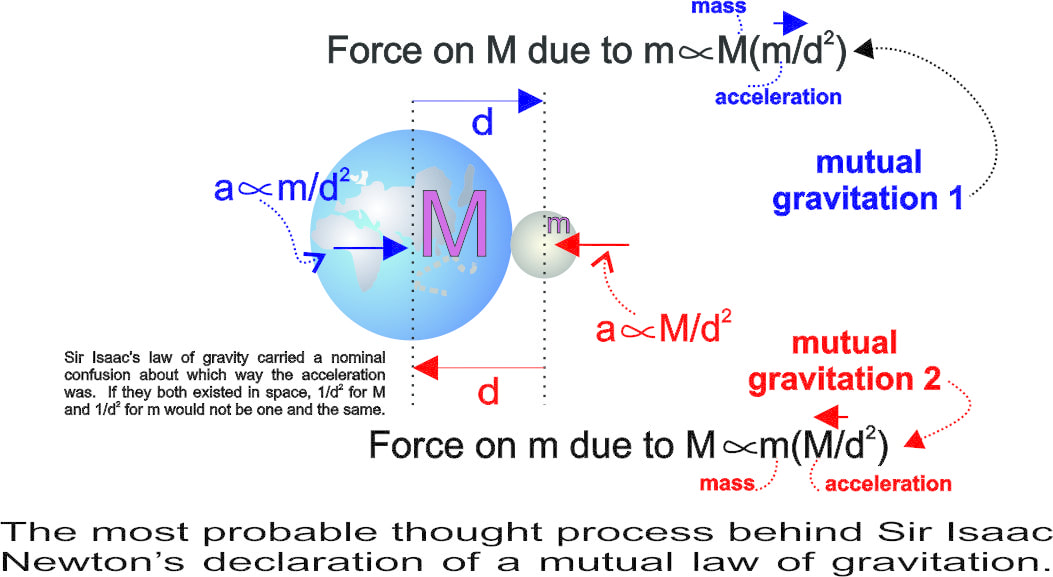 If this is the way Sir Isaac derived his law of gravity, it was an offbeat musing of a mathematician absorbed in a new field of mathematics. It was not a law of the universe.

Within the one law of mutual gravitation, M and m would then be a juxtaposition of mass and the acceleration mass causes. That was the other associated problem.

if this is the way Sir Isaac did presume his law, he has assumed his equivalence between mass and the acceleration the same mass causes towards its self. (in proportion of its quantity).

At the same time he has seen what was becoming apparent to scholars through Johannes Kepler's third law of planetary motion. This was the rate of acceleration in question diminishes with the square of distance increase from the mass.

Then he has applied these rules to two masses with respect of each other through what is now known as Sir Isaac Newton's second law. The proportion between force applied to mass and the acceleration of that mass.

​With a quick aberrant presumption that mutual gravitation 1 and mutual gravitation 2 were each other, from there and on his own admission, he has stopped thinking about the nature of gravity.
​
If Sir Isaac's apple story was true, he weren't seeing weight as depicted on the formula diagram. He was seeing M and m actually accelerating towards each other through the forces he was presuming they were applying to each other. Nothing changes, though, when the falling apple hits the ground and becomes weight on the surface of the earth.

The most unthinkable part of Sir Isaac's force of mutual attraction was the alteration of magnitude of the 'mutual' attraction as mass was moved from M to m.  Example M + m = 10. 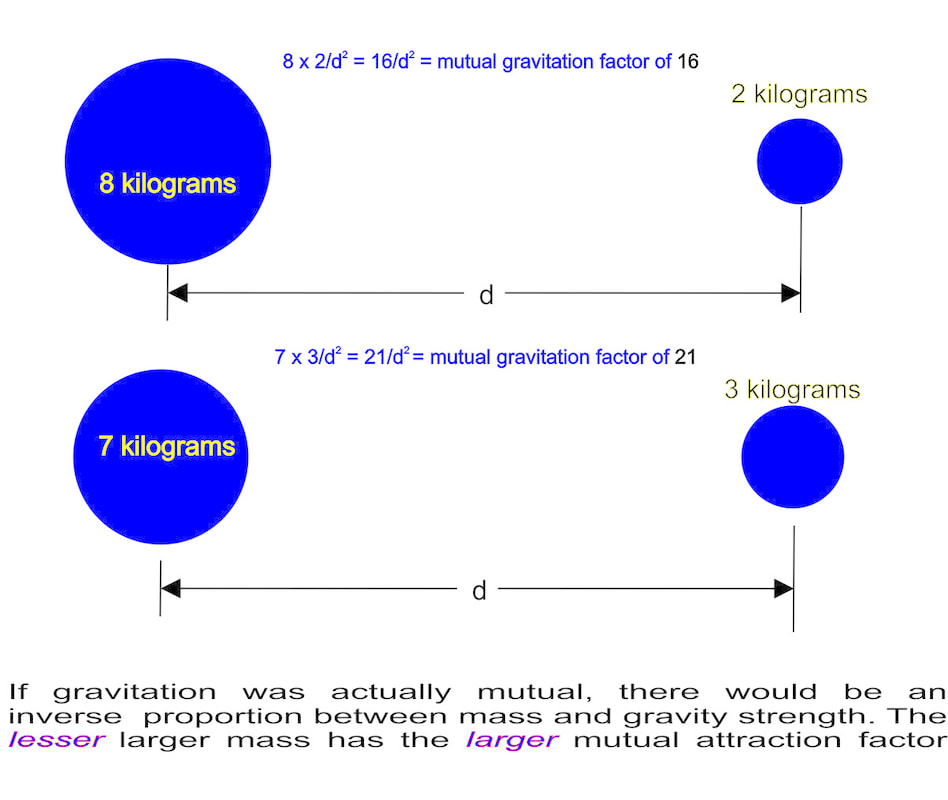 The divergence of mutual magnitudes from Sir Isaac's 'it must be of proportion of its quantity' makes the law impossible at the mathematical level.

In accordance with this proportion, there is a greater rate of acceleration towards M with an increase of M from 7 to 8. The more massive a body, the greater it's gravity.

​This is in absolute conflict with the basic demonstrable truth of the greater the mass, the greater its gravity magnitude. 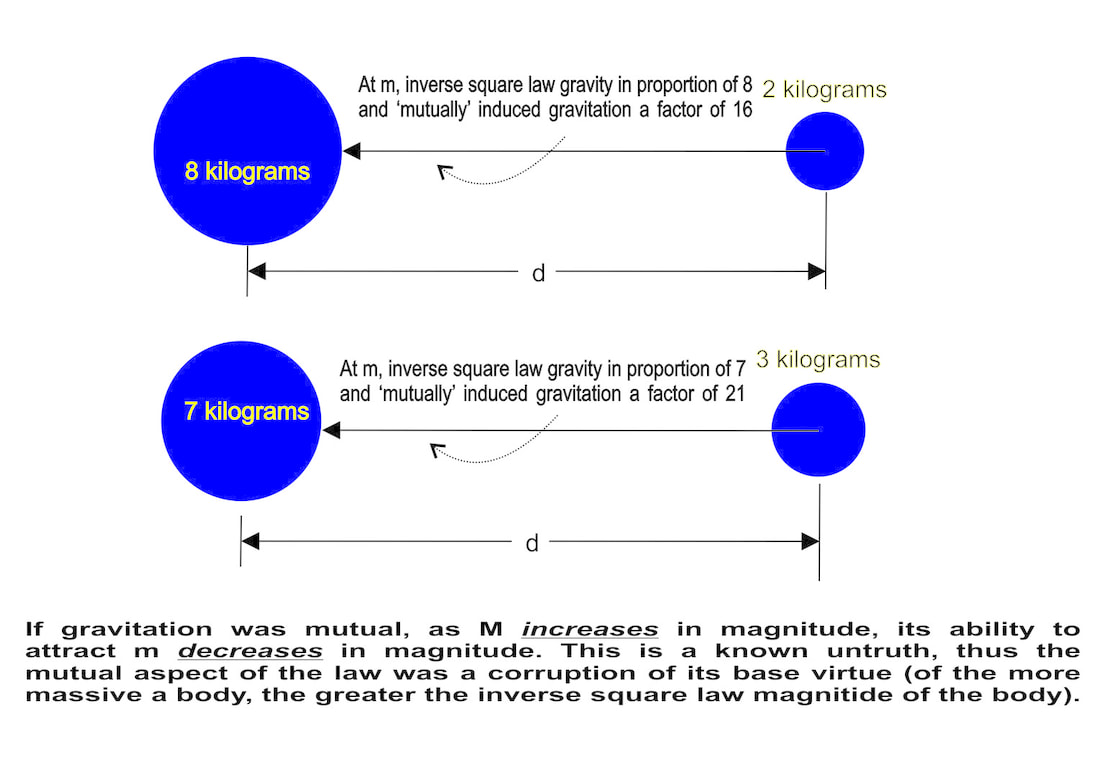 Graphically and according to current schoolbook physics, when a man stands upon the moon, there is greater mutual attraction between the earth and the moon than when the man is back on earth. It's unlikely that there is any academic line of thought to support or clarify this Newtonian perceived phenomena.

At the beginning of his thought process, Sir Isaac has said all masses have gravity. That was Sir Isaac's universal summation of the universe. Also the part that seems to grab the academic mindset as being the work of a genius able to see the entire universe at a mathematical glance.

​Sir Isaac's mutual idea extends his universal concept into therefore all masses attract all other masses. Sir Isaac's flawed oversight in this extension is the opposite directions of gravity in between any two masses. He has expected all inverse square laws to be perfect unhindered extensions from their source particle to all other particles in the universe.

​The modern vector calculations that work out where a space shot will leave the earth's inverse square law and enter another proves inverse square laws are not perfect mathematical extensions away from a particular particle through all space to a all other particles in space.

​Sir Isaac has presumed these extensions without provided mathematical reasoning. The calculation shows each inverse square law is terminating the other at this location. For the law to become a thinkable possibility, Sir Isaac was required to present rational argument of how a direction of fall rebuilds from termination into further extension.

If you have followed the link and start to become acquainted in other ways as well with the man this Sir Isaac Newton was, it becomes apparent that he was in a frenzy with his or a particular peer and wrote and wrote and wrote his new mathematics until he became settled enough inside himself to write "if I have seen further than others it's from standing on the shoulders of giants". In developing this new mathematics, he hasn't done thought about how opposite directions of gravity could mathematically fit together through all space.

Then the later use of Cavendish experiments as a proof of mutual gravitation always lacked visible integrity. The large mass was either fixed or had no account of any movement. Crucially the small masses were cancelled out during the derivation of G. The experiments derived a gravity constant relating to the inverse square law magnitude of a (larger) mass. Not one that related to the mutual gravitation of the composite mass of the universe.
​
As easily witnessed, when the terminations of earth and moon inverse square laws on the earth - moon axis is located, Sir Isaac's mutual summary of the gravity of the universe becomes mathematically untenable. Honest professors simply have need to recognise the terminating nature of adjacent inverse square laws and then remove Sir Isaac's mutual formula completely from their teachings.
​
Of the greater significance is, when the terminal point on the earth - moon axis is located, the tides of the earth can be freshly and safely understood through the location relative to a lateral equidistant point from the centre of the earth. As below. 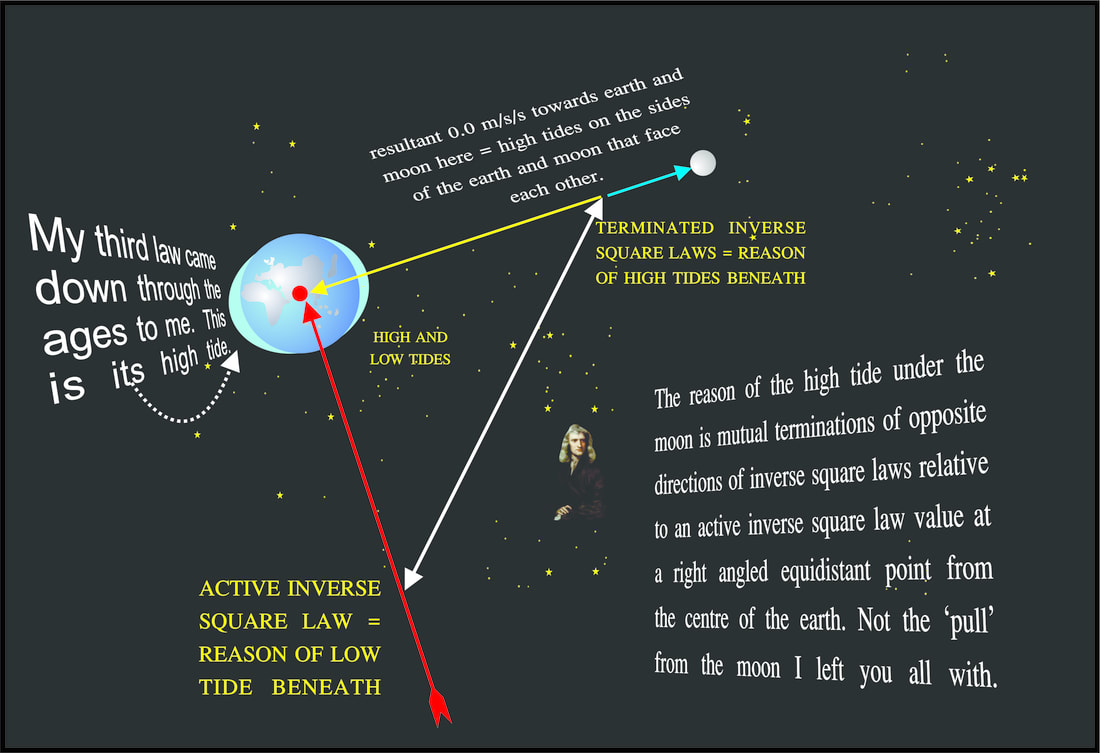 Once we start seeing the high tide under the moon through lateral relative terrestrial inverse square law values (and not any gravitation towards the moon whatsoever), the high tide away from the moon is there to be seen as the equal and opposite reaction across the centre of the earth to that moon close high tide. (And, as obvious as it is, this centre of the earth tidal deduction is the news the world is waiting for its physicists to announce. The digital age expecting to progress in an ordered manner without proper intellectual understanding of its equal and opposite tidal system way beneath all the nations of the earth is not reality. Sir Isaac's mutual rush of blood has held professors and leaders of nations alike separate from a round 6,000 km beneath our noses tidal understanding of the earth for hundreds of years now.)
​
Importantly, if Sir Isaac Newton's equal and opposite force axiom is a true science and if using Sir Isaac Newton's second law to measure weight is also a true science, the deduction of the tidal status of one side of the earth being an ongoing equal and opposite reaction to the one on direct opposite side of the core of the earth cannot be wrong. The world does have an opportunity to sort its self out through fresh conversation about its tides and the way they meet at the centre of the earth. There is associated mechanical implications aplenty.

​From Sir Isaac's Principia, his mutual gravitation law declaration in terms of what we must do.....

Lastly, if it universally appears, by experiments and astronomical observations, that all bodies about the earth, gravitate toward the earth; and that in proportion to the quantity of matter which they severally contain; that the moon likewise, according to the quantity of its matter, gravitates toward the earth; that on the other hand our sea gravitates toward the moon; and all the planets mutually one toward another; and the comets in like manner towards the sun; we must, in consequence of this rule, universally allow, that all bodies whatsoever are endowed with a principle of mutual gravitation.

Sir Isaac's declaration of what we must do was vague. They severally contain would be addition. Not the product of quantities that appear in the actual law. There isn't evidence to suggest Sir Isaac was thinking rationally when he began multiplying masses together.

The words of Sir Isaac highlighted in red are where the main problem of consequence for us is. Our sea (under the moon) is not an astronomical observation of a gravitation towards the moon in the slightest.

Our sea (under the moon) only gravitates towards the earth. This gravitation is less because of the termination of the earth's inverse square law in between the earth and the moon.

That's the point of understanding we are at and also where Sir Isaac has confused himself and everyone else who has followed him.

​Sir Isaac's ill constructed law of mutual gravitation/apple story is hiding an understanding of the tides of the earth from professors, world leaders and school children as well for no discernible good reason. Intelligent professors, including Albert Einstein and his ilk, have followed this Sir Isaac into a somewhat bizarre mathematical way of trying to comprehend the physics of the tides and the universe its self and here we are today with an elephant digitally imposed on an ocean by a past secondary school student. 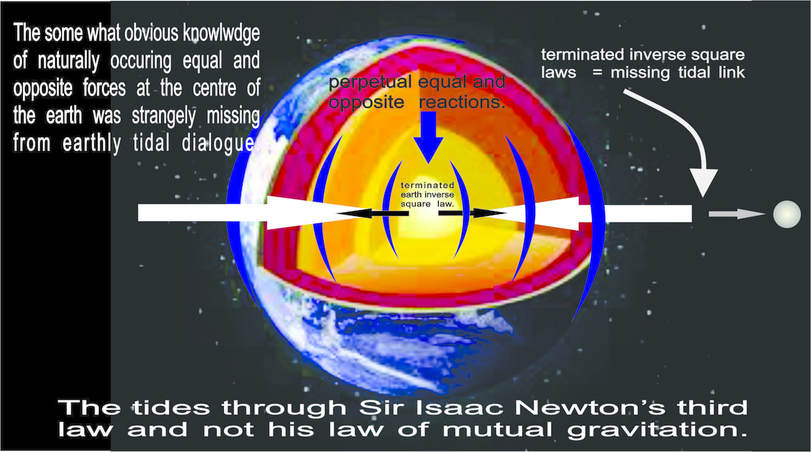 ​The elephant is on the web page. 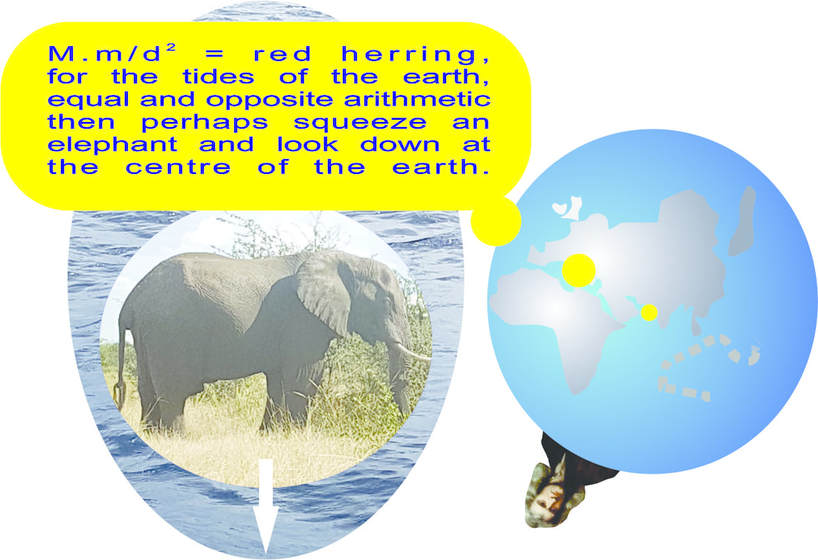 Unless the elephant has burst, the opposite F's (forces)  below should be equal as well as opposite.