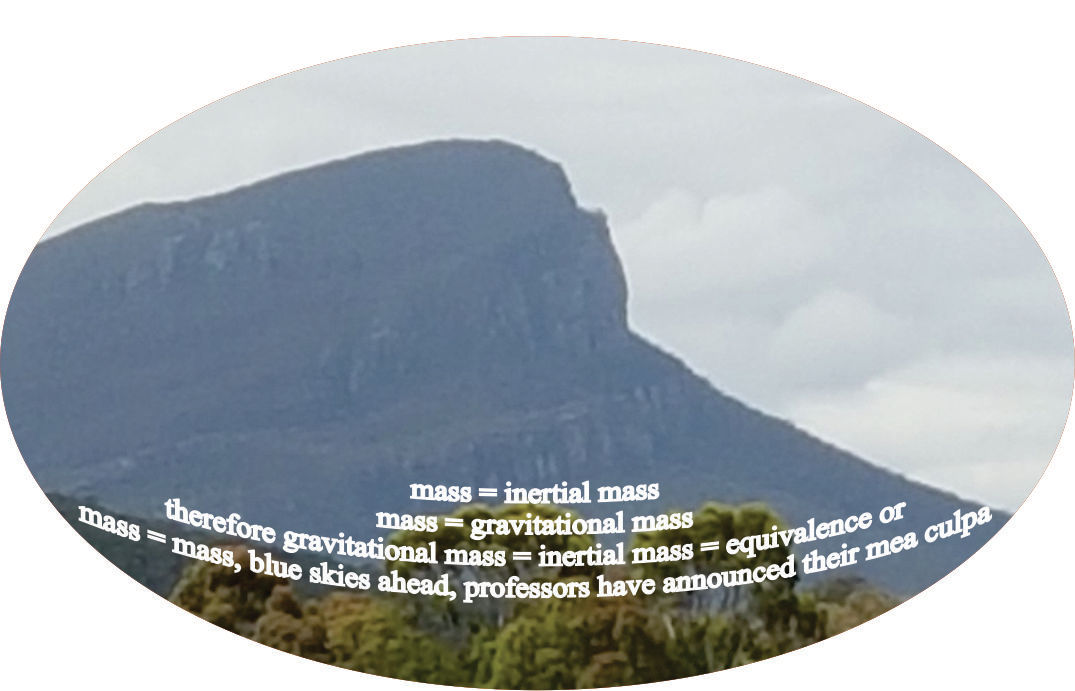 ​This is the top of the mountain getting quite stressed. The stupid Martians are now up here flashing and farting everywhere. Saying professors and rocket scientists need to view things afresh. Open your lights, what's that even mean.
​
Pretending to fire cannonballs off us as a satellite launch, don't forget the motion of your launching pads around the galaxy. They keep flashing stuff about the earth not being fixed in space.

Now they are stomping around and beaming out round isn't down. The 8,000 metres is an ascent. Requires the continual application of force to be followed. Every time they click on the little man, they fart like Uranus

Megaphone. The pretend cannon is now a real Martian megaphone. They are pointing it down at the local university. Stupid Martians. Can't they leave us other planets in peace with all our universities having their well earned fixed sun siestas.
​
​"University, if you wake up from your seemingly eternal fixed sun slumbering, the physics of the galactic motion of the solar system is yours to sort out. The current fixed star explanations of Kepler's work are archaic dross. You should be living in respect of your discovery of the motions of the stars.
​
University, you have something unexpected but simple about the sun-earth-moon relationship to work through. A push system between your earth and moon for the galactic journey of your moon to be sensible, unheard of on earth but rational once you know your earth has an approximate straight line daily speed change of 0.512 km/sec. And can't cause a moon a like speed change without a system of alternating pushes between these two celestial bodies.

The wobble of your earth across its galactic path as the moon cycles your earth is not going to be caused by your constantly relocating joint centre of gravity misdemeanour. From our view of the solar system the wobble occurs as this push alternates.

​Before to long be best to get on top something you haven't crunched up yet. And that is why a flywheel keeps turning or why a rolling wheel rolls." 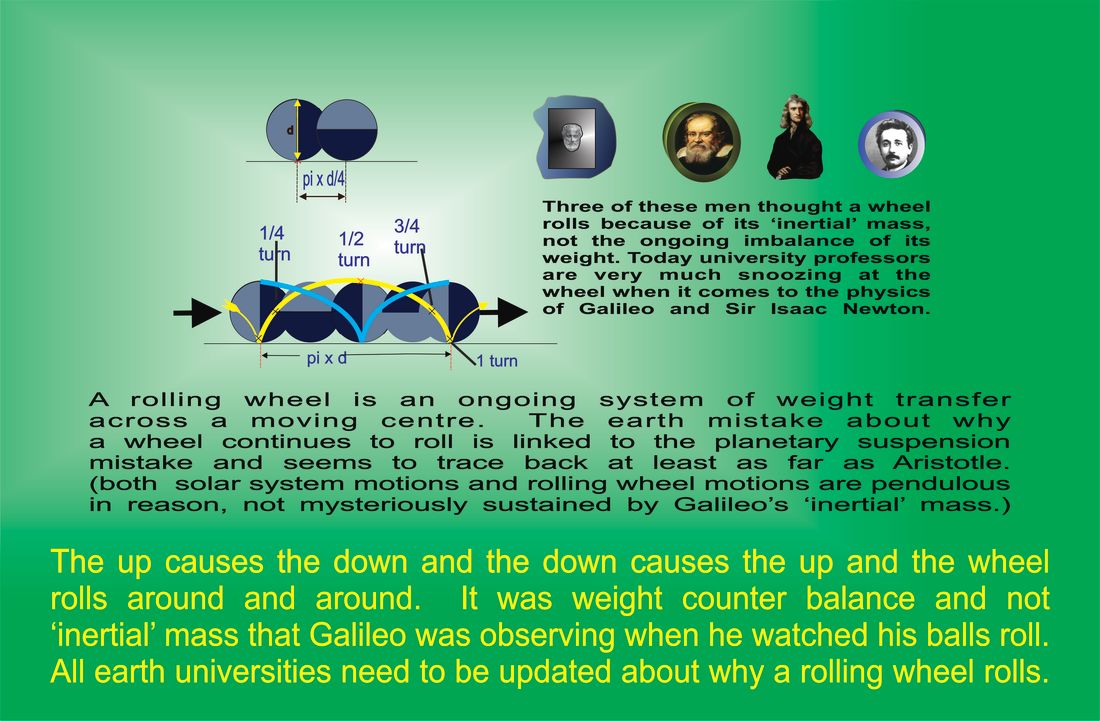 ​"Every body perseveres in its state of being at rest or of moving uniformly straight forward except insofar as it is compelled to change its state by forces impressed.

Those words became what you have been teaching as Sir Isaac Newton's first law of motion. And contain what you have quite mindlessly been educating to your students as Galileo's explanation of why planets do not fall into stars. The planets would persevere in a straight line unless compelled otherwise.

The star's gravity is the otherwise compulsion that you have been teaching. So, in keeping with your Galileo, you add the perseverance and the compulsion and you get your gravity defying answer." 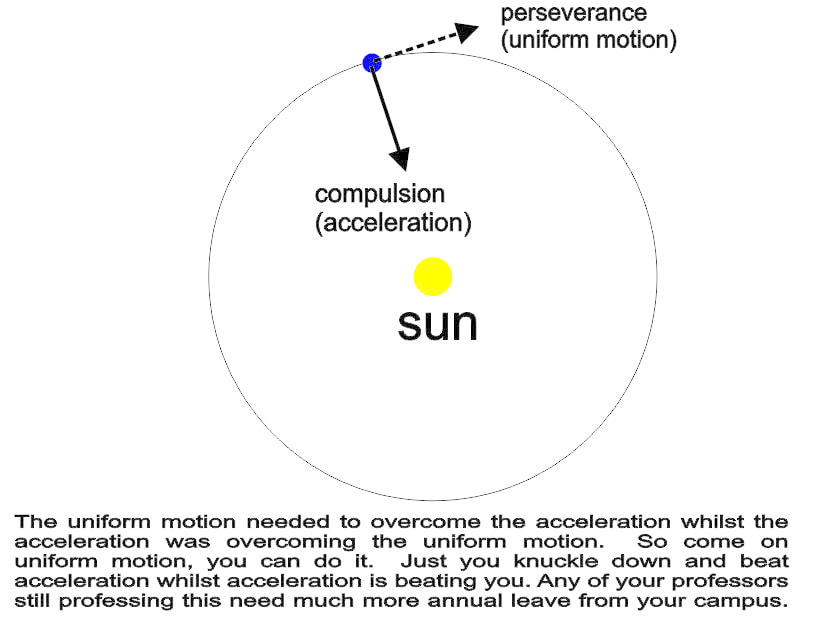 "So, a century or so after Galileo, Edmond Halley asks Sir Isaac a question about planetary paths. Sir Isaac writes a book without explanation of what causes the planets to resist descent into the sun and this becomes what you call your scholastic rebirth. You should say at some stage "Sir Isaac planets can not resist plummeting into a fixed sun without the continual application of a lifting force. You have something wrong, a university can't be reborn using a false idea to explain planetary suspension".

As a university, what you need to be told is your Sir Isaac Newton's first law of motion is two laws of motion in one. If you ever move on from using quantity as motion, you should see it isn't a succinct expression of a fundamental law of anything. The first part is the law of the conservation of momentum. That's your so called unchanging perseverance. The second part is your Sir Isaac's second law. The administration of 'compulsion' from a force impressed.

One day you may come and get this pretend cannon off this wondrous earth mountain top. If you do you should have a clearer view of why a wheel rolls and why the planets do not fall into a moving sun. And, if you do you should be able to see that Sir Isaac's first law was not a mechanical explanation of a resistance to a change of motion."

"The word 'perseverance' applied to a mass doesn't quantify a state of motion. You now need to ask yourself if a state of motion is quantified by the product of mass and velocity as in the conservation of collisionless momentum. Or is a state of motion quantified by mass alone. According to your own teaching, the answer can't be the latter. Mass is a scalar quantity. Not the vector quantity it would need to be if it was the reason of a state of motion. The vector quantity is the combination of mass and motion. Mass x velocity = conservation of uniform motion. Mass on its own = quantity.
​
​Your Sir Isaac Newton's rule one of reasoning in philosophy was : We are to admit no more causes of natural things than such as are both true and sufficient to explain their appearances.

Newton's third law = the law of force (needs development to include weight due to an inverse square law, etc).

Potential momentum change is weight. Alert to your university cleaners. University, the only real purpose of 'inertia' and 'mutual gravitation' would be to enjoy the status of being the earth's high water myth mark.

​This mark is encapsulated in full by your rarefied and madcap concept of mass existing in two forms that are the same.

Not an earth rock simultaneously existing under these two mass forms that were identical except for the word in front.

That sort of thing is very embarrassing for a highly intelligent university to be claiming to be sensible. When you measured 'inertial' mass and 'gravitational' mass to be equivalent, a truly awake scientific university would have said "Perhaps all we are doing is measuring the same quantity with different apparatus and getting the same answer both times. This might mean nothing except we are rather good at measuring the same mass with different methods, our job is one of atonement for the on earth crazy academic mess Galileo and Sir Isaac Newton began with their public utterances about mass being the cause of the perseverance of motion".

Let's face it, university. You do need to learn that the motions of the sun, earth and all other inverse square laws have been well and truly discovered. That both inertia and a mutual law of gravitation are the twisted tail ends of the misapprehensions of your B.C. period. So university, without further ado we will shove you in your cannon and shoot you straight through to inverse square law rotations."

Well how about that. They said universities should be saying sorry to us earth mountain tops for making us part of their snake oil rocket science. Whatever. Martians come and go. They need the toilet, to.