Sir Isaac Newton decree about the mutual gravitation of the universe includes an unproven presumption about an apple 'drawing' the earth as it fell.

​
Proclaiming 'gravity' in this manner was a direct contradiction of Sir Isaac's stated idea about the 'drawing' ability of matter being 'proportion of its quantity'. The product of two masses is not a proportion of mass perse. E.g. M + m = 10 units of mass. 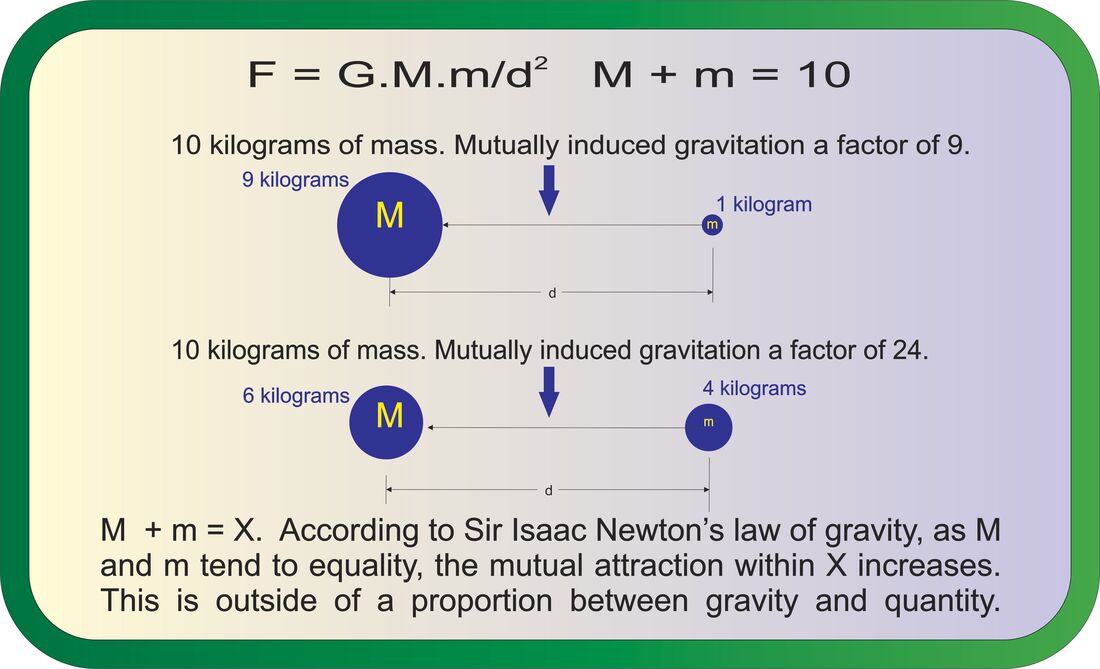 The simple mass - drawing ability anomaly within the structure of the law reveals the falling apple anecdote carries a confusion between addition and multiplication. For his part Sir Isaac did specifically appeal to his readers about 'gravity' being an unknown of his faculties.

A few centuries later, Sir Isaac's dilemma (about how gravity constantly reaches between masses) led to an Albert Einstein's theory of general relativity. Nothing travels faster than the speed of light was the new thinking of Albert's time. Therefore gravity would not act instantaneously. This allowed time into gravity and a 'space-time' curvature to be mathematically discussed around bodies like the earth and sun. Sir Isaac had left gravity at 'I don't know how'. In endeavours to explain accelerations towards mass, a 'space-time' curvature was now being considered as part of Sir Isaac's lack of understanding of an in between masses 'drawing' conveyance.

Albert had been advised by mentors not to challenge Sir Isaac's mutual formula. The inverse square law part and the existence of a gravitation constant were well proven. Following this advice, Albert presumed the basis of Sir Isaac's law to be the explanation of the universe at large.
​
Simple arithmetical analysis shows Sir Isaac was originally underpinning his logic on an opposite direction oversight. If picked up, 'readers' of Sir Isaac, like Albert Einstein, would have been entering Sir Isaac's 'gravity' knowledge gap (about how the gravity of the universe could constantly work through an apparent vacuum) from a discontinuous inverse square law perspective.

When applied to the earth and the moon, the actual calculation arithmetically explains the induction of a high tide under the moon (link). With respect of Sir Isaac's mutual proclamation, the calculation shows gravity fields / inverse square laws to be discontinuous. Sir Isaac's proclamation about the universe was relying on inverse square laws being perfectly continuous. 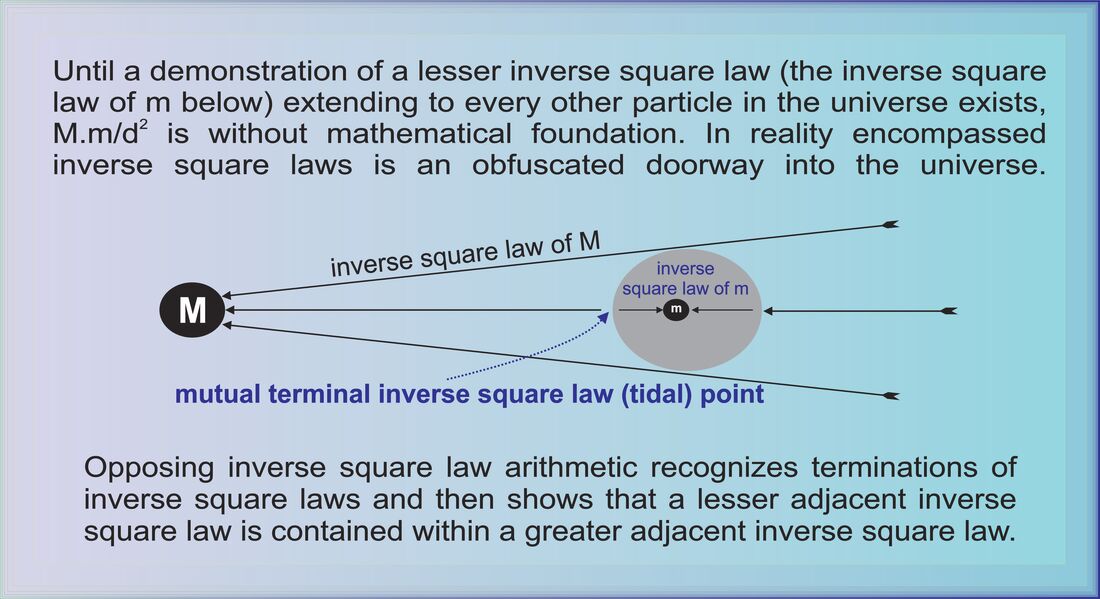 ​This simple diagram is the overdue standpoint to begin earth's mathematical understanding of periodic rising and falling of ocean heights.

​​4/ building a product of masses

​The tidy up question is thus how Sir Isaac discerned mass multiplied by mass. The notable likelihood is unreasoned unification of his second law with itself.......

From there Sir Isaac's law of mutual gravitation appears as a scalar mirror image of itself. But not as one empirical or self evident or coherent vector law linking every two particles in the universe together.

​Outside of the instances not being one or the same, the problems Sir Isaac faced were the product of mass and acceleration is a measure of the effect side of his second law.

​Below the inner structure of Sir Isaac's law of gravity is laid out as a mistake. The question for current earth bureaucrats to be asking themselves is what other way could Sir Isaac have come up with a mass x mass drawing power edict? 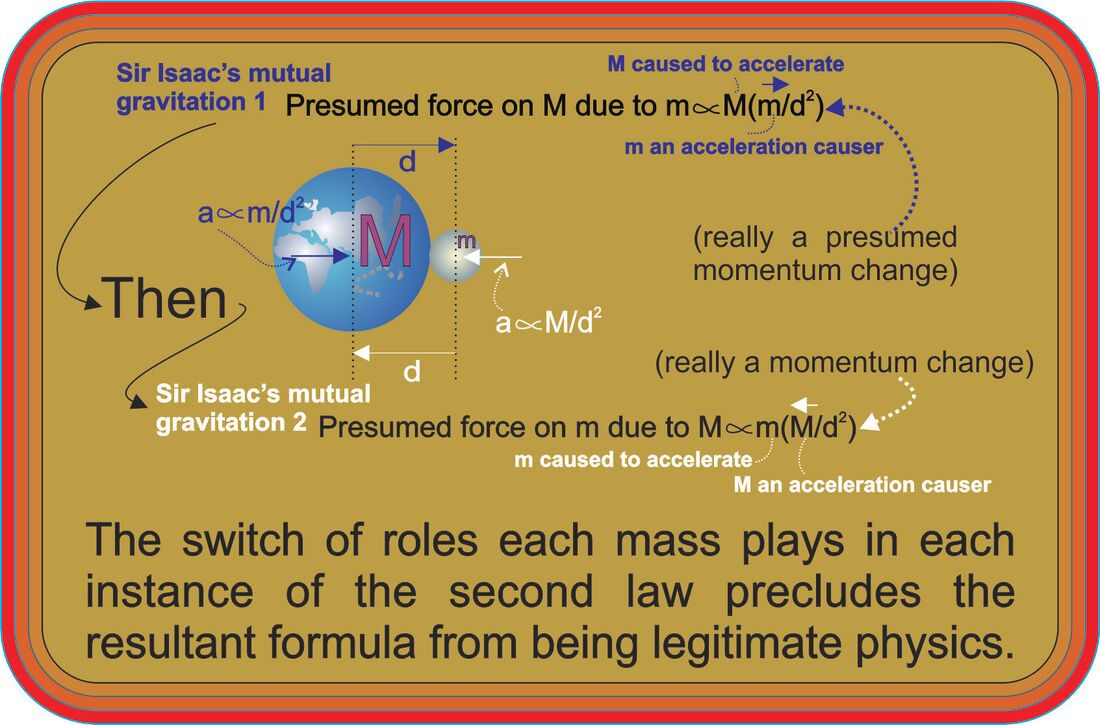 ​The first real enthusiasm Sir Isaac's 'mutual gravitation' caused seems to have been the prediction of outer planet Neptune. Modern earth professors privy to exactly how this was done can decide if a mutual formula was actually used................ 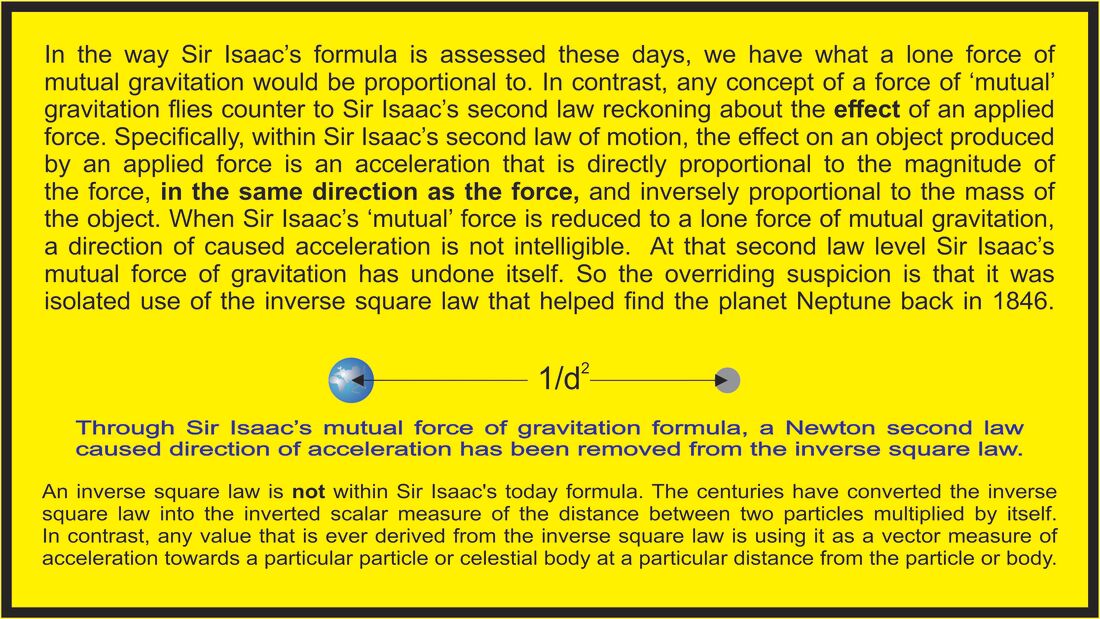 When analysed, the acceleration direction conflict between Sir Isaac's second law and his law of mutual gravitation explains what happened. Omitting to be forthcoming after the fact, Sir Isaac used his second law twice to build one law of gravitation. 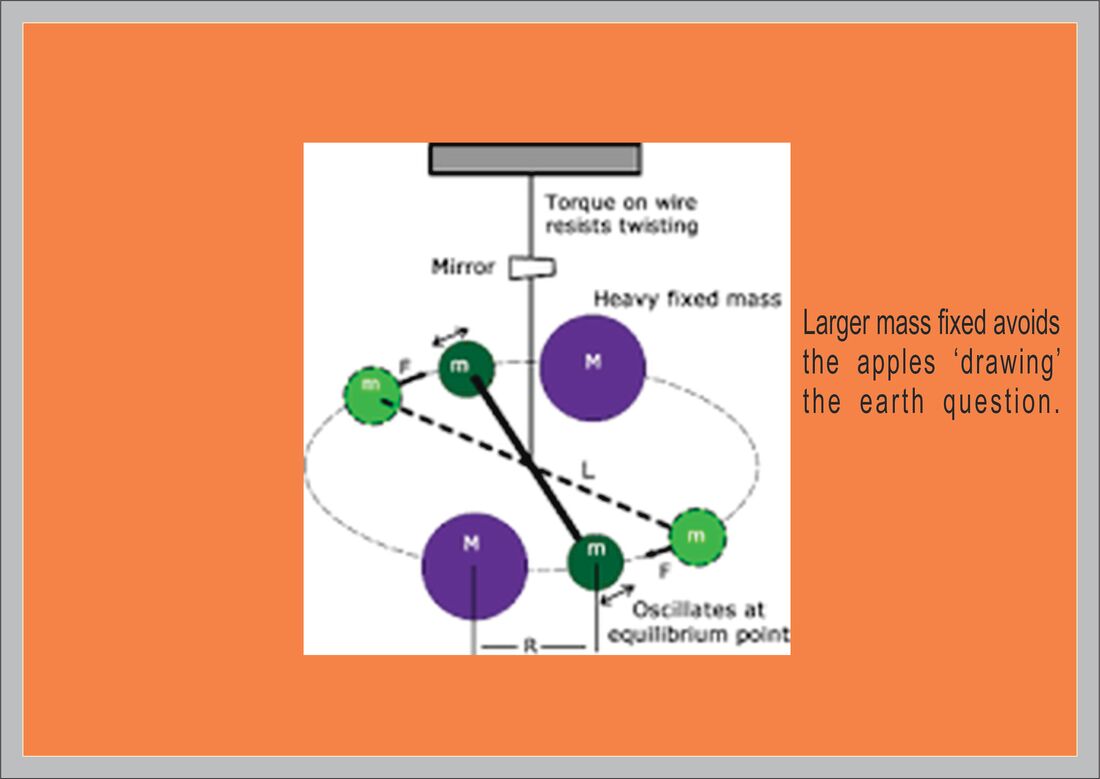 ​Modern evidence would show the proportion Sir Isaac originally presumed is between the product of quantity and surface area. Not simply quantity. For example, earth professors now know the moon has 1/6 of the surface inverse square law magnitude of the earth. Whether the moon's mass is accurately known or not, it has about 1/50 of the volume of the  earth. The moon has been assessed to have about 1/81 of the mass of the earth.[(earth's surface area x 9.8)/(moon's surface area x 1.6 = 82.4)].

Determining the masses of distant celestial bodies requires or would require careful thought. Using accelerations that aren't actually there may or may not allow for celestial mass calculations to be of meaning. The salient Newtonian point being an original moonshot recognition of the discontinuity of both fall directions in between bodies says, colloquially or otherwise, this planet does not descend in the slightest towards an apple. ​​Also that every particle in the universe is not attracting every other particle in the universe.